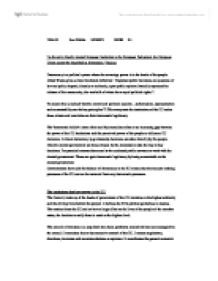 'As the only directly elected European Institution is the European Parliament, the European Union cannot be described as democratic.' Discuss

TMA 03 Dan Whittle U5236871 DD200 P.1 'As the only directly elected European Institution is the European Parliament, the European Union cannot be described as democratic.' Discuss Democracy is a political system where the sovereign power is in the hands of the people. Albert Weale gives a more functional definition: 'important public decisions on questions of law and policy depend, directly or indirectly, upon public opinion formally expressed by citizens of the community, the vast bulk of whom have equal political rights.'1 To ensure this is realised "public control and political equality...authorisation, representation and accountability are the key principles."2 This essay tests the institutions of the EU under these criteria and concludes on their democratic legitimacy. The 'democratic deficit' a term often used by journalists refers to an increasing gap between the power of the EU institutions and the perceived power of the people to influence EU decisions. In direct democracy (e.g referenda) decisions are taken directly by the people. Directly elected government are those chosen by the electorate to take the day to day decisions. For practical reasons there need to be unelected public servants to work with the elected government. ...read more.

The parliament also has the power to scrutinise the executive (council of ministers) and the commission. It has the power to censure the commission, the threat of which led to its resignation in recent times. The EP has a dialogue with the European Central bank as specified by the TEU. It receives nominations for the executive board, holds a three-monthly meeting with the president and can summon the ECB to scrutinise decisions. The European court of Justice enforces EU legislation. Judges are appointed by a common accord of the governments of the members states. The powers in bullet form: Parliament - Approves Budget - Share of decision making power in the co-decision procedure - Power to improve proposed legislation by amendment within the co-operation procedure. - Supervision of executive - representatives of the council of ministers. TMA 03 Dan Whittle U5236871 DD200 P.3 Council - Set EU objectives - Co-ordinate national policies - Legislate Court - settle disputes between the union's different institutions and member states. - has passed laws in such fields as employment, the environment, consumer protection and the free movement of goods and services. ...read more.

Where are the areas seen as central to the 'democratic deficit' problem? Council of Ministers If as stated by John Major, the EU gets its legitimacy through national Parliaments, then the attrition of national powers by the undemocratic EU institutions is undermining this idea. Romano Prodi said: "As long as the veto exists, the EU will be like a soldier trying to march with a ball and chain around one leg. The unanimity requirement means either complete paralysis or reducing everything to the lowest common denominator."3 Meanwhile the legitimacy the EU gets from National parliaments is further diminished. Commentators have noted that decisions of the parliament and Council which go against the will of the less democratic commission have been undermined anyway. In June 2001 Ireland voted against the Nice Treaty by referendum. But the joint statement issued by EU president Goran Persson and Commission president Romano Prodi was: 'The member states and the commission will pursue the enlargement negotiations with undeminished vigour and determination, in line with our firm commitment given to the applicant countries.' It's not surprising people feel disconnected from the EU elites when their feelings on the EU masterplan seem to have no effect. TMA 03 Dan Whittle U5236871 DD200 P. ...read more.