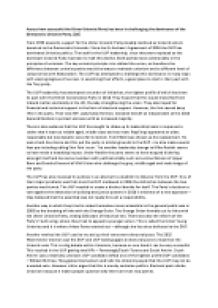 Transfer-Encoding: chunked ﻿Assess how successful the Ulster Unionist Party has been in challenging the dominance of the Democratic Unionist Party. [26] From 1999 onwards, support for the Ulster Unionist Party steadily declined as Unionist voters deserted to the Democratic Unionists. Since the St Andrew?s Agreement of 2006 the DUP has dominated Unionist politics. The task for the UUP leadership, since they were replaced as the dominant Unionist Party has been to halt this decline. Both parties have commonality in the principles of unionism. The key unionist principle is to defend the union, so therefore the difference between unionist parties would be ways to maintain unionism and to different level of compromise with Nationalism. The UUP has attempted to challenge this dominance in many ways with varying degrees of success. In examining their efforts, a good place to start is their pact with the Tory party. The UUP leadership has attempted a number of initiatives, the highest profile of which has been its pact with the British Conservative Party in 2010. ...read more.

Under Nesbitt the party seems to have stopped bickering amongst itself and has some members with political vitality such as Jo-Anne Dobson of Upper Bann and Sandra Overend of Mid Ulster who challenge the grey, middle aged and male image of the party. The UUP has also reviewed its policies in an attempt to establish its distance from the DUP. One of their major problems was that since the DUP mellowed in 2006 the distinction between the two parties was blurred. The UUP needed to create a distinct identity for itself. The Party?s decision to vote against the devolution of policing and justice powers in 2010 is evidence of a new approach ? they believed that the assembly was not ready for such a responsibility. Another way in which they tried to make themselves more accessible to the general public was in 2005 by the breaking of links with the Orange Order. ...read more.

Electoral pacts divide Unionism because it makes people question why there are even two parties. After the 2016 elections the UUP declared that they would form an opposition. This could mean the DUP and Sinn Fein?s days of domination are coming to an end. It remains to be seen how effective this opposition will be, but in theory it could lead to better politics and policy being more aggressively tested. There will now be parties openly heckling and challenging decisions from the outside. First Minister Arlene Foster simply said that the parties were, ?searching for relevance,? after their poor election results. Furthermore, the UUP has experienced success with regards to Europe. They retained their MEP, Jim Nicholson with over 100,000 votes polled. The UUP also announced at the start of March 2016 that they would be pro-EU in the upcoming referendum. This is another thing to separate them from the DUP, who support leaving the EU. They have more of a manifesto in their own right to give the Unionist people identification of difference. The majority of Northern Irish are pro-EU, so this could benefit them. ...read more.