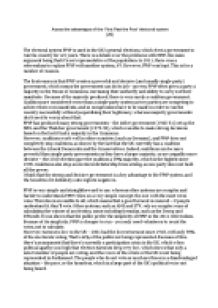 Assess the advantages of the 'First Past the Post' electoral system.

﻿Assess the advantages of the ?First Past the Post? electoral system [25] The electoral system FPtP is used in the UK?s general elections, which elect a government to run the country for 4-5 years. There is a debate over the problems with FPtP, the main argument being that it?s not representative of the population. In 2011, there was a referendum to replace FPtP with another system, AV. However, FPtP was kept. This is for a number of reasons. The first reason is that FPtP creates a powerful and decisive (and usually single-party) government, which means the government can do its job ? govern. FPtP often gives a party a majority in the House of Commons, increasing their authority and ability to carry out their manifesto. Because of the majority produced, there is very rarely a coalition government. Coalitions are considered worse than a single-party system as two parties are competing to achieve their own manifesto, and so compromises have to be made in order to run the country successfully without jeopardising their legitimacy, whereas majority governments don?t need to worry about that. ...read more.

Other systems, such as AMS and STV, rely on complex ways of calculating the winner of an election, some including formulas, such as the Droop and D?Hondt. It was shown that the public prefer the simplicity of FPtP in the 2011 referendum. Because of its simplicity, FPtP is cheaper to run ? you only need volunteers to count the votes, not to calculate. However, turnout is low in the UK ? 2001 had the lowest turnout since 1918, with only 59% of the electorate voting. That?s 41% of the public not being represented. Because of this, there?s an argument that there?s currently a participation crisis in the UK, which when political apathy is so high that election turnouts drop very low, which shows that only a select number of people are voting, and the views of the whole of the UK is not being represented in Parliament. The people who do not vote as much are those in a disadvantaged situation ? the poor, or the homeless, which is a large part of the UK?s political voice not being heard. ...read more.

Wasted votes are also an issue with this system as well. In the 2010 election, 52.8% of votes cast were for the losing candidates. That?s over half the population who made no difference to the overall outcome of the vote, and aren?t represented in the Commons by someone they support. I think that this advantage is outweighed heavily by its drawbacks, and is one of the key failing points of FPtP. When assessing voting systems, a key part of where you fall on the debate is whether you think that Parliament is in place to produce a strong government or to represent the people. It?s a compromise that has to be made, and although I feel the biggest advantage is the strong and decisive government FPtP produces ? coalitions may work well in some situations, but a single-party system work better. However, this is not enough to sway may view. I think that the advantages of the FPtP system do not outweigh the negatives. This is because it?s ridiculous that the majority of the electorates views are not represented and that smaller parties (although large) are unable to have a say in this country?s politics. ...read more.