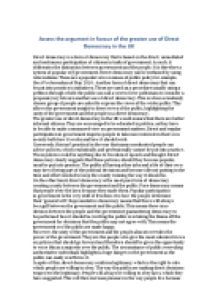 ﻿Assess the argument in favour of the greater use of Direct Democracy in the UK Direct democracy is a form of democracy that is based on the direct, unmediated and continuous participation of citizens in tasks of government. As such, it obliterates the distinction between government and the people. It is therefore a system of popular self-government. Direct democracy can be enthused by using referendums. These are a popular vote on issues of public policy for example, the AV referendum of May 2010. Another form of direct democracy that can be put into practice is initiatives. These are used as a procedure usually using a petition through which the public can call a vote to force politicians to consider a proposal. ...read more.

These policies could be anything due to freedom of speech and thought. Direct democracy clearly suggests that these policies, should they become popular, must be put into practice. The public all having other jobs and a life of their own may tire of being part of the political decisions and become idle not putting in the time and effort needed to keep the county running the way it should be. On the other hand, direct democracy is the most pure form of democracy creating a unity between the government and the public. Pure democracy means that people obey the laws because they made them. Popular participation in government is the very stuff of freedom: it is how the people determine their ?general will?. ...read more.

In spite of this, direct democracy confirms legitimacy, which is the right to rule which people are willing to obey. The way the public are making direct decisions empowers the legitimacy. People will always be willing to obey laws, which they have suggested. This will then increase pleasure in the way people live because they approve the way in which they are governed. It will again take pressure of the government because the public are forced to take responsibility for their decisions, as there is nobody else for them to blame. This helps to ensure a stable government. Alternatively, this may increase political instability. This is due to the way that people may become obsessed with their political beliefs that if a policy they propose doesn?t go forward they may be forced to start rioting and go against the government. Finally, direct democracy reduces, or removes, the public?s dependence on self-serving professional politicians. ...read more.