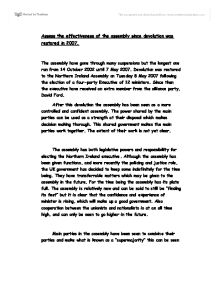 Assess the effectiveness of the assembly since devolution was restored in 2007.

Assess the effectiveness of the assembly since devolution was restored in 2007. The assembly have gone through many suspensions but the longest one ran from 14 October 2002 until 7 May 2007. Devolution was restored to the Northern Ireland Assembly on Tuesday 8 May 2007 following the election of a four-party Executive of 12 ministers. Since then the executive have received an extra member from the alliance party, David Ford. After this devolution the assembly has been seen as a more controlled and confident assembly. The power shared by the main parties can be used as a strength at their disposal which makes decision making thorough. This shared government makes the main parties work together. The extent of their work is not yet clear. The assembly has both legislative powers and responsibility for electing the Northern Ireland executive. Although the assembly has been given functions, and more recently the policing and justice role, the UK government has decided to keep some indefinitely for the time being. They have transferrable matters which may be given to the assembly in the future. ...read more.

These roles are scrutiny, policy, initiating legislation, advice and to initiate inquires and make reports. Although the committees are making progress in some of their role they have also been neglecting to take full advantage on some of their work. Initiation of legislation is one of the roles implemented in Source B, yet to this day a committee has not used this role. It may be inexperience or mayhap they have had no need to use it but it is clear that committees have not been fulfilling all 5 of their tasks in the assembly. Out of these 5 roles allocated to the assembly 1 is not used, initiation of legislation, yet although this is not used the committees have another 4 roles which can be argued as more important. Scrutiny being one of these roles has been used by the committees in the assembly many times. During the years of 1999 until 2002 the committees have scrutinized over 600 statutory rules. And in that period through the scrutiny of the budged the committee for education found a gap in the budget for rural schools with less that 100 pupils, ...read more.

Other aspects may creep into the assembly that can damage the work needed to be done by minister. In an important cross-community decision, a vote must have a majority of unionists and a majority of nationalists, without either one the vote will not count. Although it can be said that the Sinn Fein, holding a majority of nationalists, and the Democratic unionist party, having the majority of unionists, can make the vote count on their own without having the help from other nationalist and unionist parties. Each party has to choose between "Nationalist" "unionist" and "other" and a lot of speculation has been drawn up about the alliance party as entrenching sectarian divisions. The assembly have been "shaky" in the past, but over time they have learned to work together and more importantly built a relationship that hopefully in the future will keep building. Aspects of the assembly can still be seen as unsure or even having a lack of confidence, but most aspects could have been seen like that not too long ago, with time they too will gain experience and build the confidence needed. ...read more.