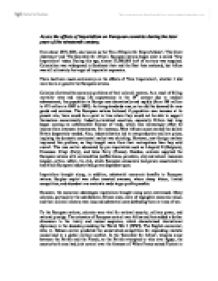 Assess the effects of imperialism on European countries during the later years of the nineteenth century. From about 1870-1905, also known as the 'Era of Empire for Empire's Sake', 'The Great Adventure' and 'The Scramble for Africa', European nations began what is called 'New Imperialism' today. During this age, almost 23,000,000 km� of territory was acquired. Colonialism was widespread in Southeast Asia and the East Asia seaboard, but Africa was still ultimately the target of imperialist expansion. There had been much controversy on the effects of 'New Imperialism', whether it did more harm or good to the European nations. Colonies alleviated the economic problems of their colonial masters. As a result of falling mortality rates and rising life expectancies in the 18th century due to medical advancement, the population in Europe rose dramatically and rapidly (from 188 million to 432 million in 1800 to 1900). ...read more.

This was earlier advocated by pro-imperialists such as L�opold II (Belgium), Francesco Crispi (Italy), and Jules Ferry (France). Besides, colonies supplied the European nations with commodities (coffee beans, porcelain, etc) and natural resources (copper, cotton, rubber, tin, etc), which European consumers had grown accustomed to and which European industry had grown dependent upon. Imperialism brought along, in addition, substantial economic benefits to European nations. Surplus capital was often invested overseas, where cheap labour, limited competition, and abundant raw materials made larger profits possible. However, the economic advantages imperialism brought along were overvalued. Many colonies, particularly the sub-Saharan African ones, were of negligible economic value, and their colonial masters even incurred substantial costs defending them in times of war. ...read more.

Pressurised by its European counterparts who were colonising more and more territories, Germany took control over three territories in eastern and western Africa, further adding to the tension between European nations. Furthermore, the Spanish-American War (1898) and the Russo-Japanese War (1904-05) signalled the emergence of new imperial powers. To defend their interests, the great powers tangled themselves into a web of alliances, making the outbreak of a world war a forgone conclusion of economic imperialism. To conclude, imperialism may have brought substantial economic benefits to the European nations. However, a big price had to be paid - worsening of relations and deeper animosity between the various great powers. Soon enough, this led to a military conflict on a unprecedented magnitude, and the costs it brought along virtually overwrote all the economic benefits gained from imperialism. Hence, imperialism brought along more harm than good to the European nations. ...read more.