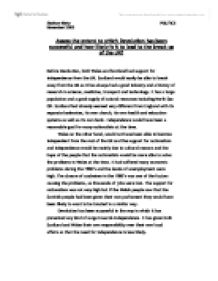 Assess the extent to which Devolution has been successful and how likely is it to lead to the break up of the UK?

Assess the extent to which Devolution has been successful and how likely is it to lead to the break up of the UK? Before Devolution, both Wales and Scotland had support for independence from the UK. Scotland would easily be able to break away from the UK as it has always had a good industry and a history of research in science, medicine, transport and technology. It has a large population and a good supply of natural resources including North Sea Oil. Scotland had already seemed very different from England with its separate banknotes, its own church, its own health and education systems as well as its own bank. Independence would have been a reasonable goal for many nationalists at the time. Wales on the other hand, would not have been able to become independent from the rest of the UK and the support for nationalism and independence would be mainly due to cultural reasons and the hope of the people that the nationalists would be more able to solve the problems in Wales at the time. It had suffered many economic problems during the 1980's and the levels of unemployment were high. The closure of coalmines in the 1980's was one of the factors causing the problems, as thousands of jobs were lost. ...read more.

The responsibilities of the separate governing body and Westminster are clearly divided so there shouldn't be much risk of a conflict between the two. Devolution also shows to be effective as it includes a Joint Ministerial Committee that unites the Scottish with the rest of the UK and helps to make sure there are no misunderstandings about the two authorities' responsibilities. Another way of avoiding conflict is by the use of the Judicial Committee of the Privy Council: this is a committee that is available to make the final decision over any conflict. Devolution does have it's problems as do all policies but I do not feel that they are likely to lead to the break up of the UK however it does show some ineffective points about devolution. A traditional policy within the UK has always been that all citizens should be treated equally no matter where they choose to live however; the introduction of new policies for different areas can lead to inequality e.g. Scottish students don't have to pay tuition fees but English students would. This can be viewed as unfair treatment. Another ineffective factor of devolution is that in a survey, only 33% of Scottish people felt that the Scottish parliament has had an impact on their life; this could show that devolution is relatively ineffective. ...read more.

Just because Britain no longer has centralized powers this does not mean to say that it will be broken up. The final say remains at Westminster, as Westminster still holds all sovereignty. The important national affairs are still controlled by Westminster e.g. foreign affairs, so Britain is still united. It is only local affairs that have been separated. Devolution doesn't seem to be leading to any support for regional devolution and this is mainly due to the fact that regions don't have very strong communities or national identities. Committees like the Joint Ministerial Committee and the Judicial Committee of the Privy Council, that both work to settle disputes, control any conflict that devolution could have caused, that could have lead to the break up of the UK. Despite some problems, Devolution has mainly been effective as it has given areas more of a say in things so that successful policies could be introduced and it has decreased the support for independence: in the 2003 elections the Scottish National Party had lost eight seats and Plaid Cymru had lost five seats. Devolution is unlikely to lead to the break up of the UK as conflict is controlled and sovereignty is held at Westminster. Roles are clearly stated and the UK seems very much united. Siobhan Kiely POLITICS November 2003 ...read more.