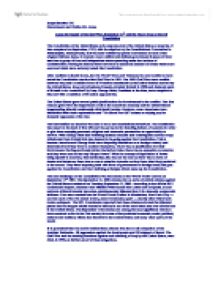 Assess the impact of the Gulf War, September 11th and the was in Iraq on the US Constitution

Assess the impact of the Gulf War, September 11th and the was in Iraq on the US Constitution The Constitution of the United States is the supreme law of the United States of America. It was completed on September, 1787, with its adoption by the Constitutional Convention in Philadelphia, Pennsylvania, and was later ratified by special conventions in each of the original thirteen states. It created a more unified and defined government in place of what was then a group of free and independent states operating under the Articles of Confederation. During its history there have been a numerous number of events which have occurred which have seriously tested this Constitution After conflicts in South Korea, the two World Wars and Vietname the next conflict to have tested the Constitution was the first Gulf War in 1991. The 1991 Gulf War was a conflict between Iraq and a coalition force of 34 nations mandated by the United Nations and led by the United States. Iraq, led by Sadaam Hussein, invaded Kuwait in 1990 and declared parts of Kuwait to be 'controlled' by Iraq. George Bush, President at the time, took exception to this and with a coallition of 34 nation opposed this. The United States gave several public justifications for involvement in the conflict. ...read more.

The September 11th attacks are among the most significant events to have occurred so far in the 21st century in terms of the profound economic, social, political, cultural and military effects that followed in the United States and many other parts of the world. It is specualted that the motive behind these attacks was due to US occupation of the Arabian Peninsula., US aggression against the Iraqi people and US support of Israel. The Gulf War and the ensuing sanctions against and bombing of Iraq by the United States, were cited, in 1998, as further proof of these allegations. As a result of these attacks America can now arrest and imprison susspected terrorists without trial. This is a breach of the Bill Of Rights which was was added to the Constitution. It breached article 7 which is regard to the judicial system, which states that everyone is entitled to trial by jury and a fair trial. However with suspected terorists being arrested with no evidence this goes agianst basic human rights and the freedom of the individual. This can also be seen as a form of religious persecution, as it was primarily percieved to be an anti-muslim campaign. The irony of this is that the Constitution was formed by the founding fathers for those who inhabited America first, which were those escaping religious persecution. ...read more.

This was clearly going against the declaration of independence as it was America who removed the government in Iraq, who they had deemed to be unlawful, they were basing the concepts of their own way of life and following their own Constitution and applying it elsewhere, they were trying to 'rule' Iraq. To conclude over the years the US Constitution has had to withstand many attacks and challenges, from the early World Wars to the most recent in war in Iraq. However, with the US Constitution being so solid and the basis of many other governments in the world, including France, it is able to withstand these pressures. Also it can be seen that over the more recent years the Constitution has begun to be questioned more often, amendments can be made to ensure that this does not occur no more. Witnessing the Gulf War, 9/11 and the war in Iraq can all show that the strongest form of government is being scrutinized more often. It is not up to one individual or nation to determine what is deemed to be unconstitutional in other countries, this makes America look to be hypocrites, this leads to the question is there is one law for America and another for the rest? ?? ?? ?? ?? Jaypal Sandhu 13C Government and Politics Mr. Jones ...read more.