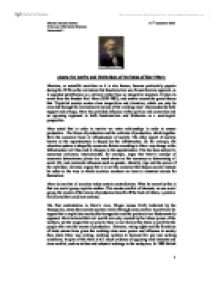 Assess the merits and limitations of the ideas of Karl Marx

Assess the merits and limitations of the ideas of Karl Marx Marxism, or scientific socialism as it is also known, became particularly popular during the 1970s as the realisation that functionalism was flawed became apparent, as it regarded stratification as a divisive rather than an integrative structure. It takes its name from the founder Karl Marx (1818-1883), and centres around the grand theory that 'Capitalist society creates class inequalities and alienation, which can only be removed through the revolutionary actions of the working class'. Surrounded by both support and critique, Marx has provided influence within politics and economics and an opposing argument to both Functionalism and Weberism as a sociological perspective. Marx noted that in order to survive we enter relationships in order to ensure production - The forces of production and the relations of production, which together form the economic basic or infrastructure of society. The other aspect of society, known as the superstructure is shaped by the infrastructure. So for example, the education system is shaped by economic factors according to Marx: any change in the Infrastructure will thus lead to changes in the superstructure. This has been subject to numerous criticisms. Interactionists, for example, argue that Marx's concept of economic determinism places too much stress on the economy as determining all social life, and overlooks influences such as gender, ethnicity, Age and the power of the individual. ...read more.

Feudalism was based upon ownership of the land. The land serfs had to give part of there produce to the landowners; in return, the landowners protected them from rival noblemen. Therefore, the change between this system and capitalism resulted in contradictions. For example, capitalism is based upon wage labour, whereas feudalism was based upon mutual obligations. The new order, capitalism, sweeps out the old social relationships of feudalism and replaced them with new. Eventually Marx believed there would be a final epoch where a communistic or socialist society would take over from capitalism. This will not be the result of a new force of production, but will get rid of the contradictions that so far characterised changes between Epochs. Collective production would remain, but ownership would change dramatically. Instead of the Bourgeoisie owning the means of production, ownership would be collective and members would share wealth that their labour produced. This new infrastructure would not be based upon exploitation and contradictions, instead a new final epoch would be born, one, which would have no need to change. It would thus result in the end of history. This presents a major limitation in the credibility of Marxism, as the revolution that Marx believed would occur, of course never has. Louis Althusser suggests that this is because "it is very difficult for the masses to overthrow capitalism as the superstructure works together to prevent a revolution. ...read more.

Marx calls this a false consciousness of reality. However he also claimed that it will only work so long and eventually people will see through it, creating a revolution against the ruling class. On the other hand, it is also observed that Legislation is passes by a democratically elected Parliament, chosen in free elections. Therefore, the law may be said to represent the will of the majority not just the ruling elite. Even so, the law is still said to favour the Bourgeoisie, such as those who try to weaken trade unions and make it difficult to take legal strike action. In the Guardian ICM survey, 67% of the population agreed that there was 'one law for the rich and one for the poor'. In spite of all the critique surrounding him, it is no exaggeration to say that, of all theorists of society, Karl Marx has deeply touched and affected all our lives. Our modern political landscape reflects divisions established in Marx's time, and in part under his influence. Whatever their protestations, the Labour Party and the Conservative Party were profoundly affected by the challenge of Marxist movements, summarised in one of the biggest selling works in history, The Communist Manifesto. It has been claimed by many that Marxism is no longer applicable to modern day society, however, it cannot be denied that his line of reasoning at the time of writing was credible, and in response, evoked much debate over the function, position and future of society. ...read more.