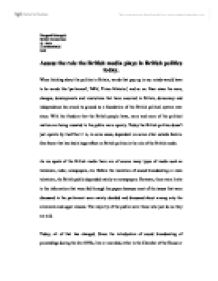 This creates criticism from the public that some of the MPs are being irresponsible. Through this criticism, it has affected the British politics by stimulating the politicians themselves to take part and show the public that they are doing their job and are taking responsibility of their duty in parliament. Not only has television given the public a better understanding of the parliament, but it has also help assist members that are not in the Chamber to be updated with what is happening in the chamber while they are out and not attending the meetings. The attraction of appearing within the range of the cameras would change the politician's habits. When members received comments from their constituents, especially within their own political party organizations, that they have not been seen on television, this could be seen as pressure, which would compel many Members to sit for long periods in the Chamber for no purpose other than to be seen on television. However, this also puts pressure on the members to be more active and participate more in the parliament. ...read more.

Even though these kind of news sells but I believe the main reason for the media criticizing the British politic so strongly is again due to the publics view of how they believe the country should be managed. Finally the main role that the media plays in the modern British politics is probably their duty to bring Parliament closer to the people so that there may be a wider understanding of its purposes, procedures and achievements. No matter what type of media, whether it is the newspaper, radio, or television and even if it may shock the viewers or the politicians themselves, it would be very valuable in building a stronger link between the Parliament of Britain and the British public. Why? So that as the Bond becomes stronger, the more democratic the country will be and Britain will be able to say that they are a country ruled by the majority of the public. All in all, the main roles of the British media in British politics today are reporting and updating the public of contemporary issues of Britain, influencing the direction of British politics and finally keeping an eye on the parliament and constantly stimulating the system to run effectively and actively. ...read more.