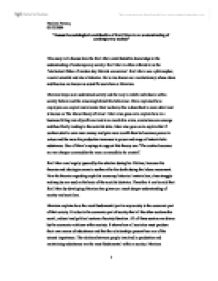 &quot;Assess the sociological contribution of Karl Marx to an understanding of contemporary society&quot;

"Assess the sociological contribution of Karl Marx to an understanding of contemporary society" This essay will discuss how the Karl Marx contributed his knowledge to the understanding of contemporary society. Karl Marx is often referred to as the 'intellectual father of modern day Marxist economics'. Karl Marx was a philosopher, a social scientist and also a historian. He is also known as a revolutionary whose ideas and theories are known as scientific socialism or Marxism. Marxism helps us to understand society and the way in which individuals within society behave and the reasoning behind this behaviour. Marx explained how employers can exploit and alienate their workers; this is described in more detail and is known as 'the labour theory of value'. Marx also goes on to explain how in a business falling rate of profit can lead to an inevitable crisis, revolutions can emerge and then finally leading to the socialist state. Marx also goes on to explain that if workers start to earn more money and gain more wealth then he becomes poorer in values and the more his production increases in power and range of materialistic substances. ...read more.

For example, a farmer after having produced for his own needs and that of his family will sell any of a surplus in order to buy the commodities they could not produce. However in capitalism what happens is that this money is invested in order to make more money, and to make a profit. Capitalist individuals will invest in commodities such as buildings, tools and workers. For a farmer this may be an investment in a factory and new tools. The capitalist's employees are also taken into account as commodities together with the business. According to Marxism, the capitalist individual will invest in those people who will be of a benefit to him and will make a profit. These commodities are necessary as they are the capitalist's means of production which will ultimately provide a means of substance for the society. Marxism explains how, the workers are alienated because they are simply an investment on the part of the capitalist and are not seen as individual people with their own perceptions and opinions. ...read more.

These workers would eventually rise up and seize the means of production, thereby creating workers revolutions. Karl Marx went on to predict that capitalism would be ultimately destroyed by its own inherent contradictions and means of production, all of which would be self-inflicted. Marx has helped us to understand how we all live in a world which has been shaped by the economic and social forces he identified. Now his work has also to a great extent the political forces of today all of which his work inspired. In my point of view It is no exaggeration to say that of all theorists of society Karl Marx is a revolutionary and has deeply touched and affected all our lives. Our modern political field reflects his ideologies and is under much of his influence. For example the Labour Party and the Conservative Party were both profoundly affected by the challenge of Marxist movements. It can be said that as the political landscape undergoes further changes, Marxism will indefinitely be consulted to help shape society for the better. Word count: 1495 ?? ?? ?? ?? Neelam Farooq 03/12/2004 1 ...read more.