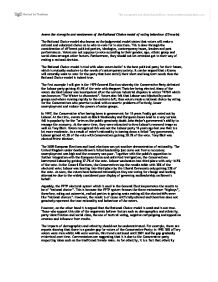 Assess the strengths and weaknesses of the Rational Choice model of voting behaviour.

Assess the strengths and weaknesses of the Rational Choice model of voting behaviour (25 marks) The Rational Choice model also known as the judgmental model states that voters will make a rational and educated choice as to who to vote for in elections. This is done through the consideration of different political parties, ideologies, contemporary issues, leaders and past performances. Voters are not suppose to vote according to their gender, age, ethnic group and social class amongst other factors. Furthermore, they should not let emotions get in their way of making a rational decision. The Rational Choice model is tied with what voters belief is the best political party for their future, which is mutually exclusive to the needs of contemporary society. It can be argued that citizens will naturally want to vote for the party that best satisfy their short and long term needs thus the Rational Choice model is indeed true. The first example I will give is the 1979 General Election whereby the Conservative Party defeated the Labour party gaining 43.9% of the vote with Margaret Thatcher being elected. Many of the voters decided Labour was incompetent after the serious industrial disputes in winter 1978-9 which was known as "The Winter to discontent". Voters also felt that Labour was hijacked by union groups and where running rapidly to the extreme left; thus voters made a rational ...read more.

However, the result is of cause artificially altered and therefore does not genuinely represent the true rationality and behaviour of the voters. However, on the other hand it is argued that the Rational Choice model is weak and is not true. Those who support this side of the arguments believe factors such as demographics and ethnicity, party identification and social class, the use of tactical voting, negative campaigning and appeal on emotion and influence from media. The impacts of demographics and ethnicity should not be underestimated. For example, there are reports showing that there is a gender gap for voters of the Conservative Party: in 1992 38% of Tory voters were men whilst 44% were woman, this trend continued until 2001 and the gap gradually minimized over time. Commentators are suggesting that it is due to the Conservative party respecting ideas such as the traditional female roles. As for ethnicity, it is a fact that ethnicity plays a determinant part in voting. Reports show that 70% of Asians and 80% of Blacks supports the Labour Party. Party identification and Social Class is another factor people take into account of when they vote. It is believed that people would often go hand in hand with their class alignment and vote accordingly. ...read more.

An example would be The Sun choosing to endorse the Conservatives in the next election; although the results are yet to be seen it is very likely that some media-driven voters, less rational will believe that "Labour has lost it". In conclusion, I do believe there are obvious reasons supported by other voting behaviour models such as the Social Structure and Party identification model which opposes the Rational Choice model. However, I do believe that in a country with such a profound and long-standing system of democracy that the majority of voters are rational and will put long term interests ahead of short term desperation. In the last century we have survived the electoral attempts of the fascist National Front party whom now have moved on to being a non-election competing fringe party. Even in the midst of a recession the British National Party has not, amid exaggerated media reports, made any major or significant electoral break through. Griffin might be speaking louder, he might be allowed to go on Question Time, but voters, the very vast majority of them are still subscribed to main stream politics. Therefore, I believe the Rational Voting Behaviour model has strengths outweighs weaknesses in this country, as the democratic culture is far-too longstanding for there to be any more than a very small minority of ignorant, uneducated, un-intellectual voters. ?? ?? ?? ?? ...read more.