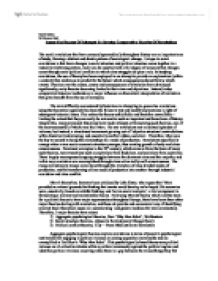 Assess The Success Of Attempts To Develop Comparative Theories Of Revolutions.

Assess The Success Of Attempts To Develop Comparative Theories Of Revolutions The social revolutions that have occurred spasmodically throughout history are an important area of study, forming a distinct and drastic pattern of sociological change.. Unique to social revolutions is that basic changes in social structure and political structure occur together in a mutually reinforcing pattern, and it can be asserted with a fair degree of accuracy that changes occur through socio-political conflicts in which class struggles do play a role. In studying revolutions, the use of theory has been employed in an attempt to provide an explanation (within a context) that enables us to predict for the future which consequences should follow which events. Theories over the causes, course and consequences of revolution have developed significantly; early theories becoming limited in their aims and objectives. Instead, today comparative historical methods are a major influence on theoretical interpretation of revolution that gives breadth from the use of examples. The main difficulty encountered by historians in attempting to generalise revolutions using the theoretical approach has been the failure to test and modify explanations in light of subsequent historical cases. ...read more.

Wolfenstein's theory, which sought to explain revolution in terms of personality have also failed as it is not possible to apply clinical methods to past political leaders and it appears only valuable to look at the role of leader in a wider social context. Having said this, Gurr's ideas of relative deprivation do help in understanding a major aspect of revolution in giving a greater insight into what gives rise to discontent. Systems/Value Consensus theories explain revolutions as violent responses of ideological movements to severe disequilibrium in social systems. Chalmers Johnson's Revolutionary Change theory sees revolution as 'the purposive implementation of a strategy of violence in order to effect a change in social structure' that will change core-value orientations, which have become out of balance between the state and its institutions and the people. A successful revolution will accomplish the resynchronisation of a social system's values and environment that the old regime was unable to accomplish. The other most significant approach to revolutions comes in political conflict theories the most important of these being Charles Tilly's From mobilization to Revolution. This theory puts the conflict between government and opposing groups at the centre of it explanation of collective violence and revolution. ...read more.

The old regimes also had a number of broad similarities, in that all three revolutions occurred in wealthy and politically ambitious agrarian states. In revolution, all three cases saw the conjuncture of the incapacitation of the established central, widespread rebellion by the lower classes (particularly the peasantry), and attempts by mass-mobilising political leaderships to consolidate a revolutionary state. This again highlights the possibility for there to be consistent factors across revolutions - a large presumption that theories of revolution make. In light of this, and whilst paying significant attention to the key differences that also occur, it can be seen that, 'the similar socio-political features of the French, Russian and Chinese revolutions can be highlighted and explained in ways that would purposefully be missed by analysts determined to keep them in separate type categories'1. It is therefore clear that whilst general theoretical explanations of revolution can adapt to the many and varied forms necessary, they lack the applicability of grounded, specific case studies. It is a catch-22, in that neither can effectively be achieved without neglecting the other, but these theories have played a large part in sociological history, and this certainly, should not be ignored. ...read more.