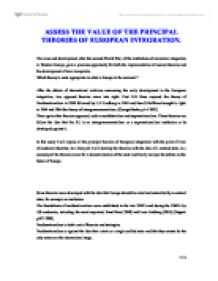 Assess the Value of the Principal Theories of European Integration.

ASSESS THE VALUE OF THE PRINCIPAL THEORIES OF EUROPEAN INTEGRATION. The raise and development, after the second World War, of the institutions of economic integration in Western Europe, gave a precious opportunity for both the implementation of current theories and the development of new viewpoints. Which theory is most appropriate to what is Europe at the moment ? After the debate of international relations concerning the early development in the European integration, two opposed theories came into sight. First E.B Hass exposed the theory of Neofunctionalism in 1958 followed by L.N Lindberg in 1963 and then S Hoffman brought to light in 1964 and 1966 the theory of intergovernmentalism. (George/Bache p5-6 2001) Then again other theories appeared, such as neofederalism and supranationalism. These theories can follow the idea that the EU is an intergovernmentalism or a supranationalism institution or be developed against it. In this essay I will expose all the principal theories of European integration with the point of view of academic theorists. In a first part I will develop the theories with the idea of a centred state, in a second part the theories more for a decentralisation of the state and finally analyse the debate on the future of Europe. Some theories were developed with the idea that Europe should be ruled and controlled by a centred state, for example an institution. The foundations of neofunctionalism were established in the late 1950's and during the 1960's by US academics, including, the most important, Ernst Haas (1958) and Leon Lindberg (1963).(Nugent p507 1999). Neofunctionalism is both a set of theories and strategies. ...read more.

The "national interests" was above all the first care of governments. Hoffmann agreed that interest groups could influence governments, but anyway the fact that national governments possessed "legal sovereignty and had political legitimacy" made them the decisive authority for important settlement.(George/Bache p 12 2001) (Rosamond p76 2000) In 1993 Andrew Moravcsik developed the idea of a liberal intergovernmental Europe. He built is concept by criticising the theory of neofunctionnalism, just like Hoffmann did. He considered that theories of European integration should be completed by theories hat concerned the nation itself. The States continue to exert their sovereignty completely, so that the institutions are created only to act as secretariat preparing and implementing the policies of integration. "The regions, along with member-states and local governments, are the only actors in European politics enjoying electoral legitimacy."(Morcillo p 8) In the case of the intergouvernmentalism, the States agree on certain points concerned with their national legislation, but there is no concept of common right. On the other hand Moravcisk considers that the treaties are the key to the integration process.(Morcillo article) The idea of federalism for he European integration came along after the Second World War. Resistance movements that had taken place during the war created in 1946 "The European Union of Federalists" (EUF), the most representative person was Altiero Spinelli. Spinelli was held prisoner by the Fascists with Ernesto Rossi, this is the time they wrote "the Ventotene Manifesto", claiming for a "European federation" (Woodard 1995) Spinelli declared that if on one hand it was necessary to make the states accept a treaty according to which they ...read more.

Either they can try to find issues together or some problems must be solved by a higher institution common to all countries parts of the European Union. Concerning the debates on European integration, the national governments had a controversial place. Anyway during fifty years they have played a significant role in the approach of European integration. As we can note the principal "fear" is the lost of the sovereignty of the states, but some theories consider that even though governments can through into gear the process, it finally goes on by itself. Presently the main objective is finding a way to make people realise that a European culture exists, and therefore they would be able to consider themselves as European. This procedure has already been launched with the creation of a single European currency which could be the first sign for people of a real unification among themselves. The enlargement towards Eastern Europe is, at the moment, one of the main goal of the European Union. It is, in my opinion, a proof that member states agree that they are presently in a safe position, allowing them to welcome other countries in the bosom of the actual "European Union". I guess that neither the theory of inergouvernmentalism nor the theory of supranationalism, or other theories, can be regarded as most suitable for Europe at present. All theories have valid arguments. However, we must account that the European Union is in a constant evolution, thus one theory would be adequate at a certain period, while in another time an other theory could be more apposite. 1 / 1 ...read more.