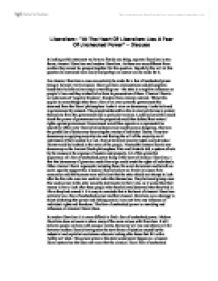 &quot;At The Heart Of Liberalism Lies A Fear Of Unchecked Power&quot; - Discuss.

Liberalism : "At The Heart Of Liberalism Lies A Fear Of Unchecked Power" - Discuss In looking at this statement we have to first do one thing, separate liberalism in two forms, classical liberalism and modern liberalism. As these are very different from another they cannot be grouped together for this question. Hopefully this will let this question be answered more easily and perhaps an answer can be made for it. For classical liberalism a case can certainly be made for a fear of unchecked power being at its heart. Early classical liberal political commentators and philosophers based their beliefs on one simple overriding one - the state is a negative influence on people's lives and they wished to be from its persecution of them. Classical liberals are advocates of 'negative freedom', freedom from external restraint. Whilst this applies to many things other than a fear of an over-powerful government this stemmed from the liberal philosophers Locke's view on democracy. ...read more.

Modern liberals firmly believe in the importance of the individual before that of society or of the state but understand that equality of opportunity must be given for all to succeed as some are born with far more opportunity than others and some are born with little or no opportunity at all even if they are a brilliant person. Classical liberals would not believe in this and would see any form of helping individuals as the state overstepping what its boundaries should be and that people can make it to the maximum of their ability without help from the outside. At the heart of modern liberalism would seem to be a belief that the state should help individuals help themselves to become the best they can and give equal opportunity to all rather than help no one for fear of the state becoming all powerful. Modern liberals do fear unchecked power but not to the overriding extent that classical liberals do. ...read more.