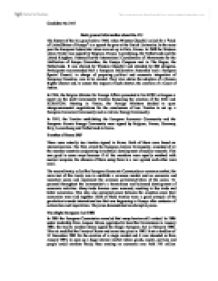 Back ground information about the EU

Back ground information about the EU The history of the EU goes back to 1946, when Winston Churchill called for a "kind of United States of Europe" in a speech he gave at the Zurich University. In the same year the European Federalists Union was set up in Paris, France. In 1948 the Western Union Treaty was signed by Belgium, France, Luxembourg, the Netherlands and the United Kingdom. Fostered by the International Coordination of Movements for the Unification of Europe Committee, the Europe Congress met in The Hague, the Netherlands. It was chaired by Winston Churchill and attended by 800 delegates. Participants recommended that a European Deliberative Assembly and a European Special Council, in charge of preparing political and economic integration of European Countries, was to be created. They also advise the adoption of a Human Rights Charter and, to ensure the respect of such charter, the creation of a Court of Justice. In 1956, the Belgian Minister for Foreign Affairs presented to his ECSC colleagues a report on the draft Community Treaties foreseeing the creation of the EEC and EURATOM. Meeting in Venice, the Foreign Ministers decided to open intergovernmental negotiations for the conclusions of two Treaties to set up a European Economic Community and an Atomic Energy Community. In 1957, the Treaties establishing the European Economic Community and the European Atomic Energy Community were signed by Belgium, France, Germany, Italy, Luxembourg and Netherlands in Rome. Treaties of Rome 1957 There were actually two treaties signed in Rome. Both of them were based on internationalism. The first, called the European Atomic Community, consisted of all the member countries cooperating in technical development of nuclear research. This was good in some ways because if all the members were equally matched with nuclear weapons, the chances of them using them in a war against each other were small. The second treaty, called the European Economic Community or common market, the main test of this treaty was to establish a common market and an economic and monetary union and implement the common policies/activities of the union. ...read more.

The monetary authority of the central Bank is made up of the European central bank and the national central banks of the countries that participate in the European monetary Union. The European central bank is responsible for making sure that members states keep there interest rates in line with the European central bank. The EMU aims to stabilise member states currencies. So far 11 out of the 15 member states permanently fix their exchange rates and the single currency was brought in. The importance of the Euro as a single currency is based on its scope that it affects all the economic agents of the countries that accede to the third stage of the EMU and that it is a currency with influence on other countries, including those which do not form part of the EU. The existence of the Euro as the single currency favours the single market. And has a great import on businesses that operate in the EU. The Euro reduces the degree of uncertainty among the currencies of each nation with respect to the exchange rate, this improves the quality of information with which businesses uses to make there decisions like when to sell there products. Since all the EU nations have a single currency European trade will have a low cost to businesses as they don't have to buy the currency or worry about the exchange rates since they all use the same money. When a member state is put of the EMU, this means tighter control on interest rates which means spending by customers which is good for businesses, when people buy more this increase sales and profit levels helping the business to gain a large market share. Greater prices transparency when all goods are labelled in a single currency, this provokes an increase in the level of competition in the single market. When price stability is obtained this can have large benefits for businesses as they are able to control their production costs, for the public administration and for consumers. ...read more.

Purchasing economies, because businesses know that they have a larger market and there is increased demand for their products, they buy in bulk and enjoy the benefits of bulk buying. For example obtaining suppliers of material and components at lower unit costs. Thereby cutting variable costs. Financial economies come from the lower costs of capital charged to large businesses by providers of finance. Banks charge lower rates of interest and equity investors are more willing to accept low dividend yield from bigger businesses. This is because larger companies are usually more diversified and less vulnerable to liquidation than small companies. External economies come about when costs fall due to growth of the industry and not just individual firms. For example if an industry is concentrated in one geographical area it is likely that a pool of labour will be attracted and trained, by institutes that will have specialised skills useful to the whole industry and from which each firm will benefit. Here we can see EU trade creating employment for a large number of its population and reducing the number of people unemployed, this in turn improves the economy of that particular country and the EU in general. A large grouping of firms concentrating in a certain area will attract a network of suppliers, whose own scale of operation should yield economies such as lower component costs. Free market In a market were businesses are free to move labour, goods, insurance and banking services without paying taxes or facing border controls, business with in that area is more favourable. As a result more companies will try to gain access to the new markets. This means that there is a lot of competition, which may lead to better quality and cheaper products. Another advantage of EU trade is that it harmonies taxes and trading standards making international trade easier. Because the countries trade with each other this reduces the likely hood of political conflict between them. Candidate No.1541 ...read more.