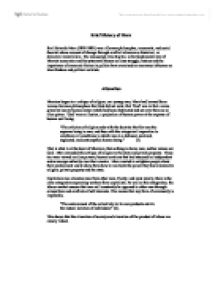 Brief History of Marx Karl Heinrich Marx (1818-1883) was a German philosopher, economist, and social theorist whose account of change through conflict is known as historical, or dialectical materialism. His manuscript, Das Kapital, is the fundamental text of Marxist economics and his systematic theses on class struggle, history and the importance of economic factors in politics have exercised an enormous influence on later thinkers and political activists. Alienation Marxism began in a critique of religion, as a young man, Marx had learned from various German philosophers that God did not exist, that 'God' was in fact a name given by men to human nature which had been abstracted and set over them as an alien power. 'God' was an illusion, a projection of human power at the expense of human well being. "The criticism of religion ends with the doctrine that for man the supreme being is man, and thus with the categorical imperative to overthrow all conditions in which man is a debased, enslaved, neglected, and contemptible human being." (1) That is what is at the heart of Marxism, that nothing is above man, neither nature nor God. ...read more.

Marx viewed history in terms of different forms of ownership and essentially thought that there were four distinct stages (or epochs) - tribal, ancient, feudal and capitalist. Tribal This was a form of primitive communism. It was based on a productive system based around kinship and where individual members co-operatively produced the means to survive collectively - therefore there were no struggles between classes as it simply did not exist. Ancient Tribes merged and formed cities and states. Property became privately owned and a system of class relations developed from this ownership. The relationship between owners and producers of labour formed a class system of citizen and slave (e.g. ancient Rome). Feudal The chief form of property in this stage was landed property, with a class system emerging between enserfed peasants who perform the physical labour, and the aristocracy, who had social and political rights giving them power over the serfs. Capitalism With the industrial revolution meaning that working on the land had given way to working in factories etc - the peasant serfs from the previous epoch were now effectively turned into 'wage slaves' who must sell their labour in order to meet their economic needs. ...read more.

Government, the judicial system etc would no longer be necessary. These institutions were based on the assumption that there would be conflicts of interest in society that would need to be regulated. In communism though, class will have vanished and therefore so would the basis of conflicts. Also with peoples material needs being met and the abolition of private property the main reason behind the system for law and order would no longer be required either. Criticism of Marx's Theory Marx believed that it was inevitable there would be a revolution - he did not realise that the bourgeoisie would make concessions to the proletariat helped by the formation of trade unions. He also believed in class being bipolar whereas with the rise of 'middle class' there is multi polarisation. Marx's view was that the larger and more powerful companies (or bourgeoisie) would takeover the smaller independent ones leading to a rise in the numbers of the proletariat. Though to an extent this does happen - there are numerous small or middle sized independent business still going strong - there are also laws now to prevent monopolies and competition is encouraged. Marx's theory of history has to be commended though as it is an insightful view into how class struggles have shaped society. ...read more.