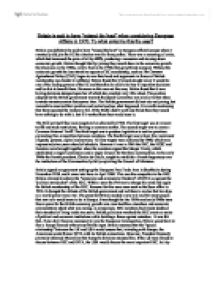 Britain is said to have &quot;missed the boat&quot; when considering European Affairs in 1970. To what extent is this the case?

Britain is said to have "missed the boat" when considering European Affairs in 1970. To what extent is this the case? Britain can definitely be said to have "missed the boat" in European affairs because when it eventually did join the EC the situation was far from perfect. There was a mounting oil crisis, which had increased the price of oil by 400%, producing a recession and slowing down economic growth. Britain thought that by joining they would share in the economic growth they had seen in the 1960s, only to find in the 1970s that growth had slumped. Without the economic growth the less attractive aspects of EC membership, such as The Common Agricultural Policy (CAP), began to rear their head and arguments in favour of British membership was harder to withhold. Britain found that if joined straight away it would be one of the leading powers of the EC and therefore be able to be key in important decisions and be able to benefit them. ...read more.

However it was in 1965 the EEC, the ECSC and Euratom were brought together when the members signed the Merger Treaty, which established a single Commission and a single Council for the three communities. In the early 1960s the French president, Charles de Gaulle, sought to establish a French hegemony over the institutions of the Communities by fully exploiting the Council of Ministers. Britain signed an agreement setting up the European Free Trade Area in Stockholm during November 1959, and it came into force in April 1960. This was the competitor to the EEC. Britain claimed to admire the "economic and commercial freedom" of EFTA as against the "political straitjacket" of the EEC. Within a year the PM was to change his mind and apply for British membership of the EEC. Reasons for this were ones such as the Suez affair in 1956. It changed the attitude of the British government and led them to realise that her days as a world power were over. ...read more.

In December 1962 de Gaulle told Macmillan that he intended to veto Britain's application unless Britain broke with the American alliance. Macmillan did the opposite by having a meeting with President Kennedy, which resulted in the Nassau Agreement where Britain's stake in NATO's nuclear programme was increased. Instead of adopting the position of humble supplicant in applying to join the Communities, Britain gave the impression of doing Europe a favour by the application. It is a classic act of British arrogance, striking through the community even today. However in 1969 de Gaulle resigned due to members of the EC not liking the way he did things without consultation. Within the year, the new French president, George Pompidou, had met the new British PM, Ted Heath, and dropped the hint that France would no longer oppose British membership. Britain finally signed the Treaty of Accession in Brussels in 1972. The EEC finally conceded to Britain joining it, but at what cost, what had Britain missed out on. By "missing the European Community boat" it had firmly established itself as a lesser influence; forever? Well to date! ...read more.