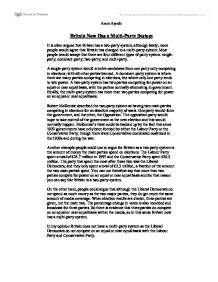 Britain Now Has a Multi-Party System

Britain Now Has a Multi-Party System It is often argued that Britain has a two-party system, although lately, more people would agree that Britain has changed to a multi-party system. Most people would accept that there are four different types of party system: single-party; dominant-party; two-party; and multi-party. A single-party system would involve candidates from one party only competing in elections, with all other parties banned. A dominant-party system is where there are many parties competing in elections, but where only one party tends to win power. ...read more.

The opposition party would hope to take control of the government at the next election and this would normally happen. McKenzie's view could be backed up by the fact that since 1922 governments have only been formed by either the Labour Party or the Conservative Party, though there were Conservative-dominated coalitions in the 1930s and during the war. Another example people could use to argue for Britain as a two party system is the amount of money the main parties spend on elections. The Labour Party spent a total of �25.7 million in 1997 and the Conservative Party spent �28.3 million. ...read more.

On the other hand, people could argue that although the Liberal Democrats do not spend as much money as the two major parties, they do get much the same amount of media coverage. When election results are shown, three parties are given, not the main two. The percentage change in votes is also recorded and broadcast for three parties. So there is evidence that three parties do compete on an equal or near equal basis within the media, so in this sense Britain now has a multi-party system. In my opinion Britain does not have a multi-party system as the Liberal Democrats do not compete on an equal or near equal basis with the Labour Party and Conservative Party. ?? ?? ?? ?? Azam Ayoubi ...read more.