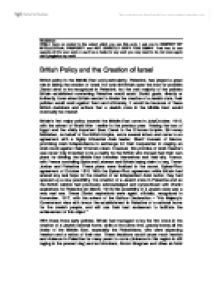 Disclaimer: While I have no control to the extent which you use this work, I ask you to RESPECT MY INTELLECTUAL PROPERTY and NOT DIRECTLY COPY THIS ESSAY. Feel free to use aspects of it in your work or use it as a basis for any work you may need to do, but once again don't plagiarize my work! British Policy and the Creation of Israel British policy in the Middle East and particularity, Palestine, has played a great role in aiding the creation of Israel. Not only did Britain open the door for possible Zionist aims to be recognized in Palestine, but the vast majority of the policies Britain established concerning Palestine would assist Zionist goals, directly or indirectly. Even when Britain wanted to hinder the creation of a Jewish state, their policies would work against them and ultimately, it would be because of these British decisions and actions that a Jewish state in the Middle East would eventually be created. Britain's first major policy towards the Middle East came in July/October, 1915, with the advent of World War I earlier in the previous year. Fearing the loss of Egypt and the vitally important Suez Canal to the Ottoman Empire, Sir Henry McMahon, on behalf of the British Empire, wrote several letters and came to an agreement with a highly influential Arab leader, Sharif Hussein of Mecca, promising Arab independence in exchange for their cooperation in staging an Arab revolt against their Ottoman rulers. ...read more.

Then in June, 1922, as if to show their commitment to Zionist goals, Britain gave a Jewish Zionist, Herbert Samuel, the role of Britain's first High Commissioner (or Governor) to Palestine. As a direct result of Britain's mandate on Palestine, Jewish immigration to the country increased. However, as Ahrom Bregman and Jihan el-Tahri say in The Fifty Years War: Israel and the Arabs "[The Arabs] quickly began to fear that increased Jewish immigration would swamp them." With rising, Arab, insecurity came violence and as a result many Jews (and Arabs) were killed. This lead to British concern for the stability of the region and in July, 1937, a Royal Commission concluded with the 'Peel Report' that the partitioning of Palestine into separate territories, individually controlled by the Jews, Arabs and British, was the only way to quell unrest. The report also suggested that Jewish immigration should be limited to 12,000 people a year. While the report seemed to be somewhat anti-progressive towards the Zionist aspirations that Britain were so eager to meet in the San Remo Mandate, Zionists still accepted the report. This was because it would still provide an official Jewish national home and in the face of violence it re-affirmed Britain's commitment to Zionism. However, the real significance of the Peel report towards the creation of Israel lies in that, for the first time, partition would be ...read more.

was blown up, taking the lives of 91 people. After suffering international criticism and Jewish terrorism as a result of the White Paper, Britain decided to hand Palestine over to the United Nations (who would then partition it and create Israel). Then on the 15th of May, 1948, a disgraced Britain withdrew from Palestine, leaving behind a country in turmoil, a turmoil it had created through its 33 years of differing policy. Overall, British policy has played an integral role in the creation of Israel. Initially it opened up the possibility of a Jewish state in Palestine and gave the Zionists the strong European support it would need if their ambitions were ever to be recognized. British policy would then lay the groundwork for the Jewish state and facilitate more Jewish immigration, giving the Zionists their first real foothold on Palestine. It would pioneer the idea of Partition and even the British policy designed to work against Zionist aspirations (in the form of the White Paper) would inadvertently lead to global sympathy for the Jews. This in turn would lead to Britain's departure from Palestine, the partitioning of the country by the UN and finally an official Jewish state - Israel. Without any British intervention in Palestine, it is hard to see many of the above conditions occurring, conditions which were all necessary for the creation of Israel to actually occur. It is for this reason that British policy was absolutely vital to the creation of Israel. ...read more.