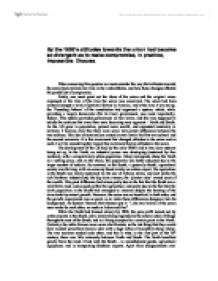 By the 1850&amp;#146;s attitudes towards the union had become so divergent as to make compromise, in practice, impossible. Discuss.

By the 1850's attitudes towards the union had become so divergent as to make compromise, in practice, impossible. Discuss. When answering this question we must consider the way that attitudes towards the union had evolved over time in the United States, and how these changes affected the possibility of compromise. Firstly, one must point out the ideas of the union and the original views expressed at the time of the time the union was conceived. The union had been created amongst a wave of patriotic fervour in America, and at the time it was set up, the 'Founding Fathers' of the constitution had organised a system, which, while providing a largely democratic (for its time) government, was most importantly, federal. This system provided government on two levels, and this was supposed to satisfy the sections that even then were becoming very apparent - North and South. As the US grew in population, gained more wealth, and expanded massively in territory, it became clear that there were some very potent differences between the two sections. This idea of sectionalism existed on two levels: the first was cultural and the second economic. It is this movement that changed attitudes to the union and as such, I will be considering the impact this movement had on attitudes to the union. The development of the US had, by the early 1800's led to two clear systems being set up. ...read more.

The now famous "Missouri Compromise" satisfied both sides, but the issues raised during its conception filled many of the 'old guard' with fear - such as Thomas Jefferson: "This momentous question, like a fire bell in the night, awakened and filled me with terror"1. Slowly but surely, the Union began to represent different things to the sections. The South began to look upon it as an oppressive state that was attempting to wipe out its way of life, while the North continued to look upon the union as the basis of government by the people. However, the question of the extension of slavery into new territories came back in 1836-1837, with the Texan fight for independence from Mexico. Once the army that had gathered from the South and West defeated General Santa Anna and Texas had effectively gained independence, its citizens hoped that it would be allowed to join the union. However, this is where the flames of mistrust were rekindled. Some Northerners feared that slave owners had orchestrated the Texas rebellion against Mexico, in order to allow the South to gain control of government. It was the sheer size of Texas that frightened them: it would be perfectly possible for it to be split in to 3 or 4 slave states, which would severely change the balance of power. It became clear that the problem would not stop at Texas. ...read more.

Any such deal would have to placate both the abolitionists, by ensuring that, at the very least, slavery would no longer expand; the slave owners, by ensuring that they no longer felt threatened by the North; and all the groups in between, by offering a solution that would not only save the honour of the South, but also the union from the internal tensions that are threatening to tear it apart. The problem is that, as with every compromise, not everyone will be completely pleased, and even if they could be convinced to accept the terms as the best on the table, there is no way to allow for future practical problems (such as the enforcement of the Fugitive Slave Bill which the South viewed as a key failure in the attitude of the North). The compromise of 1850 did indeed seem to offer a solution, but the problem remained that there was no way to erase the memories of the sections, and as such, any incident against the compromise could cause all the old demons to return. In conclusion, I believe that, due to the nature of the sectional conflict, and because the views towards the union had changed so dramatically, by 1850, it had become impossible to work out a long-term compromise. A conflict was needed, because, as Lincoln put it: "A house divided against itself cannot stand...this government cannot endure, permanently half slave and half free", and possibly war proved to be the ultimate kind of compromise - the compromise of loss of life versus loss of government. ...read more.