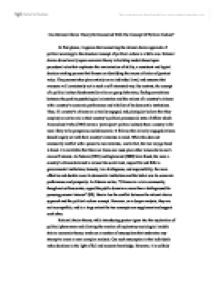 Can Rational Choice Theory Be Reconciled With The Concept Of Political Culture?

Can Rational Choice Theory Be Reconciled With The Concept Of Political Culture? At first glance, it appears that reconciling the rational choice approach of political sociology to the structural concept of political culture is a futile one. Rational choice draws heavily upon economic theory in building models based upon procedural rules that emphasise the maximisation of utility, a consistent and logical decision making process that focuses on identifying the course of action of greatest value. This process takes place entirely on an individual level, and assumes that everyone will consistently act in such a self-interested way. By contrast, the concept of a political culture fundamentally relies on group behaviour, finding correlations between the positive psychological orientation and the actions of a country's citizens with a country's economic performance and viability of its democratic institutions. Thus, if a country's citizens are civically engaged, and playing (or believe that they canplay) an active role in their country's political processes (a state of affairs which Almond and Verba (1963) terms a 'participant' political culture) then a country is far more likely to be prosperous and democratic. It follows that civically engaged citizens should largely act with their country's interests in mind. While this does not necessarily conflict with a person's own interests,- and in fact, the two may go hand in hand- it is inevitable that there are times one must place other values above one's own self interest. ...read more.

. . to allow interpersonal variation may generate insuperable problems of tractability" (17). Yet justifying this on grounds of theoretical parsimony, it is plainly illogical to assume that decisions, rules and tastes remain constant. In fact, given the vast capacity of human beings for change, the opposite is more accurate. The implications in such a case are enormous. The creation of a political culture is predicated on the diffusion of values that emphasise civic responsibility and participation. While a slow process, it nevertheless relies on the conversion of people to potentially altruistic ideals, thus making their behaviour logically consistent with rational choice theory. Taking the argument further, if an individual can change from being self-interested, the reverse can happen as well. If self-interest can be acquired, it may very well be an entirely socially constructed trait. In this light, it is impossible to say that acting in self-interest is the default rational choice. It is equally likely that acting in an innate rational manner may entail altruism, patriotism and civic participation. One common argument against civic behaviour is the free-rider problem, which occurs when a good, whether economic, political or social, is produced regardless of whether one contributes to its provision or not. In The Logic of Collective Action, Olson argues that "only a separate and 'selective' incentive will stimulate a rational individual in a latent group to act in a group-oriented way," (51) ...read more.

Almond and Verba elaborate, "because politics has little importance for them, few citizens are motivated to think about their influence or their political activities." For most people, the demands of daily life will mean that little time is left to actively participating in the political process. In conclusion, it is safe to say that there is no essential conflict between rational choice and political culture. While there is an apparent conflict, one finds that they arise because of the underlying assumption of rational choice, or of the need for rational choice to simplify in order to produce useful models of coherent behaviour from which to work with. Removed from the theoretical and brought out into the living, breathing world that political culture seeks to capture, one finds that the roadblocks that arise in preventing the two concepts to fit together harmoniously are removed and that they actually conform to each other. As Almond and Verba write, "The democratic citizen is expected to be active in politics and to be involved. Furthermore, he is supposed to be rational in his approach to politics, guided by reason, not emotion. He is supposed to be well-informed and to make decisions- for instance, his decision on how to vote- on the basis of careful calculation as to the interests and the principles he would like to see furthered" (1963, 29). Where a political culture of active participation in politics and civic engagement exists, the citizen's rational choice is to fully participate. ...read more.