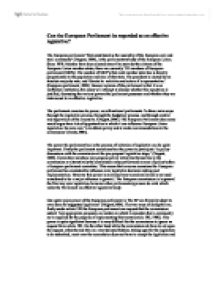 can the European Parliament be regarded as an effective legislative

Can the European Parliament be regarded as an effective legislative? The European parliament 'first constituted as the assembly of the European coal and steal community' (Nugent, 2006), is the parliamentary body of the European Union. Since 1979, Member have been elected every five years by the citizens of the European Union member states, there are currently 732 members of European parliament (MEPs). The number of MEP's that each member state has is directly proportionate to the population and size of that state. The president is elected by an absolute majority vote, and 'directs its activities and acts as it's representative.' (European parliament, 2006). General opinion of the parliament is that it is an ineffectual institution; this essay will attempt to discuss whether this reputation is justified, discussing the various powers the parliament possesses and whether they are tantamount to an effective legislative. The parliament exercises its power, as with national parliaments 'in three main ways: through the legislative process, through the budgetary process, and through control and supervision of the executive.'(Nugent,2006). The European Parliament does some would argue have lots of opportunities in which it can influence European Union legislation. Its main role 'is to debate policy and to make recommendations to the commission' (Drake,1994). ...read more.

This is also the situation when it comes to consulting on legislation as the parliament is not fully consulted on all legislation it can not always have an influence over it and therefore becomes an ineffective organisation. Also as the power fo veto that the government has can be over turned by the council at anytime, the effective legislative power is somewhat diminished. There is however the view point that a lot of these fall downs in parliamentary power are not in practice that difficult to overcome, The commission and the council often find it increasingly difficult to over turn the parliaments decisions and go against its veto's, the parliament also has a large amount of informal power and although the parliament does not have to be consulted on all of the legislative in practice most of it is discussed with them even if this is only on an informal basis. In conclusion the parliament is not the main powerhouse behind legislation within the European Union, however it does have some effective legislative power which the commission and council may find difficult to get in the way of. In practice there are a number of limitations the Parliament though and it is not very effective when it comes to all areas of legislation, however unlike general opinion it does in fact have some quite substantial powers which make it effective in some areas of the legislative process. ...read more.