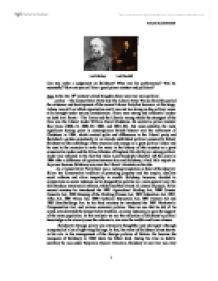 Can you make a judgement on Salisbury? What was his performance? Was he successful? How can you call him a great prime minister and politician?

Lord Salisbury Lord Churchill Can you make a judgement on Salisbury? What was his performance? Was he successful? How can you call him a great prime minister and politician? Ans. In the late 19th century United Kingdom there were two main political parties - The Conservative Party and The Liberal Party. We see from this period the existence and development of the current Labour Party but however, at this stage, Labour was still an infant organisation and it was not too strong on the political arena to be brought under serious consideration. There were strong and influential leaders on both rival fronts - The Tories and the Liberals among which the strongest of the time was the Liberal leader William Ewart Gladstone. He served as prime minister four times (1868-74, 1880-85, 1886, and 1892-94). But most probably, the most significant turning point in contemporary British history was the retirement of Gladstone in 1894, which created splits and differences in the Liberal party and furnished a golden opportunity to an already established political personality Robert Salisbury to take advantage of the situation and emerge as a great political leader and he rose to the occasion to write his name in the history of this country as a great conservative leader and the Prime Minister of England. His ability as a strong political leader was reflected in the fact that when Lord Randolph Churchill left the party in 1886 after a difference of opinions between him and Salisbury, it had little impact on its power because Salisbury won over the Liberal Unionists on his side. ...read more.

In fact, he manipulated the issue of the victory of the British troops in the Boer War immensely to the favour of the Conservatives claiming that they were responsible for the victory of the army in South Africa. Here we see Salisbury's performance over the foreign policy of Britain as well as extending and preserving the British Empire quite outstanding and with this performance he won over the votes of the right wing people. The aftermath of the war was exaggerated by Salisbury and he used the issue of the English victory in the Boer War tremendously in the election of 1895 in the favour of the Conservatives. It caused a massive amount of frustration in the Liberal camp who, already weakened by the retirement of Gladstone and the splits under Rosebury, could clearly see defeat in their face even before the actual election was held. The Liberals faced even more losses when the Liberal Unionists left the party (right-wingers led by Hartington and the left-wingers led by Chamberlain) censuring the party on its stand on the issue of the Boer War. This fact is strengthened when we take into account the private letter of Campbell-Bannerman to Sir William Harcourt describing the lack of enthusiasm and motivation amongst the party workers and also his disappointment at the widespread feeling of nationality from which the Conservatives were gaining electorate support massively. ...read more.

According to many, he gave his ministers too much freedom in running their own departments and he often acted only as a mediator and did the balancing act rather than providing a strong leadership for the cabinet. Many historians also believe that he was primarily responsible for the long and expensive Boer War. Thus we come across varying opinions when it comes down to judging Salisbury as a prime minister and more importantly, a political leader. We must, in conclusion, stress on the fact that by all means he was one of the greatest politicians England had ever produced and his intellect was reflected in many of his political decisions, some even violating the Conservative tradition. He often twisted and manipulated the issues before presenting them to the public in election campaigns (Boer War) and ultimately got his own way in winning electorate support. But we must also keep in mind that he was an extremely intellectual politician and all he did was to gain political support from the people and remain in power. Probably any other politician, being in his position, would like to reach the same political destinations but it was unlikely that he would have achieved them because the methods and policies he followed were extremely well planned and well thought out. Thus, keeping in mind his characteristic cunningness and lack of morale values he went down in history as one of the greatest British prime ministers purely because of his achievements in his long political career. ?? ?? ?? ?? ARUNI MUKHERJEE 1 ...read more.