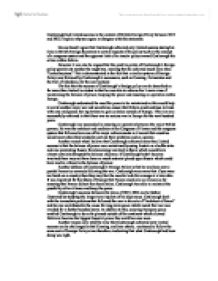 Castlereagh had limited success in the context of British Foreign Policy between 1815 and 1822. Explain why you agree or disagree with this statement.

Castlereagh had limited success in the context of British Foreign Policy between 1815 and 1822. Explain why you agree or disagree with this statement. On one hand I agree that Castlereagh achieved only limited success during his time as British Foreign Secretary as certain aspects of his policy such as the concept of a congress system and the apparent lack of an insular policy earned Castlereagh his critics within Britain. However it can also be argued that the positive points of Castlereagh's foreign policy greatly out number the negatives, meaning that he achieved much more than "limited success." This is demonstrated in the fact that a similar system of Foreign Policy was followed by Castlereagh's successors, such as Canning, Palmerston and the Earl of Aberdeen, for the next century. The fact that the success of Castlereagh's foreign policy can be described as far more than limited is evident in that he was able to achieve his 3 main aims of maintaining the balance of power, keeping the peace and ensuring co-operation within Europe. ...read more.

It was important for the future of Europe that France could join an alliance so by ensuring that France did not face humiliation, Castlereagh was able to maintain the possibility of an alliance and keep the peace. Castlereagh's success between the years of 1815-1822 can be further illustrated by studying the longer term impacts of his diplomacy. Castlereagh dealt with the immediate problems that followed the war in his role of "Architect of Peace" and he also contributed to the cause for long-term peace which meant that war was avoided for a further hundred years. In addition to this, securing European peace enabled Castlereagh to do as he pleased outside of the continent which allowed Britain to become the biggest Imperial power the world has ever seen. Another reason as to why the view that Castlereagh achieved only limited success can be challenged is that Canning, and later others, continued to follow the same sort of Foreign Policy aims therefore vindicating that what Castlereagh had been doing was right. ...read more.

However by focusing on keeping the peace, ensuring co-operation and maintaining the balance of power, Castlereagh was actually greatly assisting British interests as a stable Europe meant that Britain could trade with ease and focus on its territorial ambitious away from Europe. In conclusion I disagree with the statement that Castlereagh "had limited success in the context of British Foreign Policy." Despite failings in the congress system and coming under some criticism for being believed to be close to absolutist leaders and following what some thought was a non-insular policy, Castlereagh achieved the three main aims of his foreign policy which were to achieve co-operation between countries, maintain peace and maintain the balance of power. He was responsible for a system of democracy which saw countries sitting down to resolve their problems and the main principles of his foreign policy were followed by his successors for many years to come. ...read more.