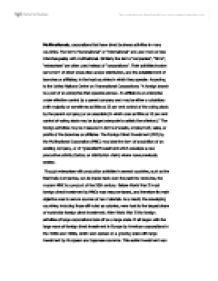 Multinationals, corporations that have direct business activities in many countries. The terms "transnational" or "international" are used more or less interchangeably with multinational. Similarly the terms "companies", "firms", "enterprises" are often used instead of "corporations". Their activities involve some form of direct production and/or distribution, and the establishment of branches or affiliates, in the host countries in which they operate. According to the United Nations Centre on Transnational Corporations: "A foreign branch is a part of an enterprise that operates abroad. An affiliate is an enterprise under effective control by a parent company and may be either a subsidiary (with majority or sometimes as little as 25 per cent control of the voting stock by the parent company) or an associate (in which case as little as 10 per cent control of voting stock may be judged adequate to satisfy the criterion)." The foreign activities may be measured in terms of assets, employment, sales, or profits of the branches or affiliates. The Foreign Direct Investment (FDI) by the Multinational Corporation (MNC) ...read more.

Therefore, by far the largest share of FDI by MNCs originates from developed countries; and not only the source but also (contrary to popular belief) the destination of the largest share of such investment lie within the developed countries themselves. Most MNCs are indeed very large corporations. However, the 1980s and 1990s have seen an increasing number of smaller corporations expanding their production activities abroad and thus joining the league of multinationals. Similarly, an increasing number of MNCs now originate from the newly industrializing countries and some from the developing ones. These developments are aided by improvements in the technology of transport and personal communications, as well as by the application of new technologies to production processes. Common Agricultural Policy (CAP), system supporting and regulating agriculture in the member countries of the European Union (EU). The Treaty of Rome, which established the European Economic Community in 1957, made explicit provision for a common agricultural policy, the fundamental objectives being to increase agricultural productivity, ensure a fair standard of living for the agricultural community, stabilize markets, guarantee a secure supply of food, and make products available to consumers at reasonable prices. ...read more.

Reforms to the CAP to curb over- production were introduced in 1984, 1988, and, most radically, in 1992. These involved a market-oriented price strategy (the resulting drop in agricultural incomes being cushioned by specific income support); quantitative and qualitative control of production through quotas and compensatory payments; premiums for set-aside schemes (grants to farmers to take land out of production); and diversification of production to bring supply more in line with demand. The adoption of more environmentally friendly agricultural practices has also been encouraged. The CAP has long been a contentious issue in international trade relations, not least during the Uruguay Round of the General Agreement on Tariffs and Trade, which concluded in December 1993. Under the new international rules, agreed despite considerable opposition from EU farmers, the EU is committed, over a six-year period from the beginning of 1995, to reduce substantially its agricultural import charges and domestic subsidies, to cut the value of its export subsidies, and to reduce the volume of its subsidized food exports.1 Prospects 1"Common Agricultural Policy," Microsoft(r) Encarta(r) Encyclopedia 2000. (c) 1993-1999 Microsoft Corporation. All rights reserved. ?? ?? ?? ?? ...read more.