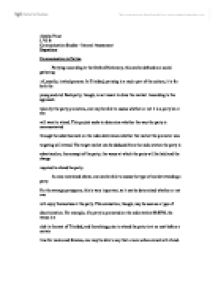 Ayesha Prout L VI B Communication Studies - Internal Assessment Expository Communication in Parties Partying: according to the Oxford Dictionary, this can be defined as a social gathering of, usually, invited persons. In Trinidad, partying is a major part of the culture; it is for both the young and old. Each party, though, is not meant to draw the market. According to the approach taken by the party promoters, one may be able to assess whether or not it is a party he or she will want to attend. This project seeks to determine whether the way the party is communicated through the advertisement on the radio determines whether the market the promoter was targeting will attend. ...read more.

This evaluation, though, may be seen as a type of discrimination. For example, if a party is promoted on the radio station 98.9FM, the venue is a club in the east of Trinidad, and the asking price to attend the party is at no cost before a certain time for males and females, one may be able to say that a more urban crowd will attend. Another issue raised is the age group of persons attending a specific party. It is hardly ever found a party with a mixture of young adults and middle-aged persons. This may be because either groups may have complex issues with associating with each other, the type of music played may not be well suited for both groups or the concept of the party may not appeal to both crowds. ...read more.

There were a few persons who did not look like the type of person expected at the party. Another challenge was that some promoters did not aim at any specific target market. In this way, the crowd was a mixture of all different types of persons. Overall, though, the theory established that the target market of a party can be determined by the way it is communicated was proven to be accurate. Parties can be communicated in various ways on advertisements on the radio, which can be used to draw the attention of certain persons. This communication is very important as it determines whether or not one will enjoy themselves at the party. It can be then said that the venue, the concept and the asking price of the party can be used to draw a certain market. ...read more.