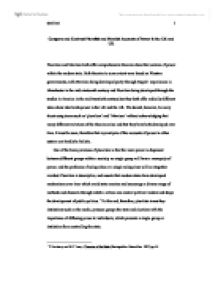 Compare and Contrast Pluralist and Marxist Accounts of Power in the UK and US.

Compare and Contrast Pluralist and Marxist Accounts of Power in the UK and US. Pluralism and Marxism both offer comprehensive theories about the location of power within the modern state. Both theories to some extent were based on Western governments; with Marxism being developed partly through Engels' experiences in Manchester in the mid nineteenth century and Pluralism being developed through the studies in America in the mid twentieth century; but they both offer radically different ideas about who holds power in the UK and the US. We should, however, be wary about using terms such as 'pluralism' and 'Marxism' without acknowledging that many different variations of the theories exist, and that they have both developed over time. It must be seen, therefore that my analysis of the accounts of power in either system can hardly be holistic. One of the basic premises of pluralism is that the more power is dispersed between different groups within a society, no single group will have a monopoly of power, and the problems of ruling elites or a single ruling class will be altogether avoided. Pluralism is descriptive, and asserts that modern states have developed mechanisms over time which avoid state monism and encourage a diverse range of methods and channels through which a citizen can control political leaders and shape the development of public policies.1 To this end, therefore, pluralists invest key institutions such as the media, pressure groups the state and elections with the importance of diffusing power to individuals, which prevents a single group or institution from controlling the state. ...read more.

partly due to the fact that elections are infrequent and that beyond them there is very little decisive action a citizen can take that will impact on government decisions. Pressure groups in America are generally assumed to be more influential than in Britain, partly due to the weaker party system to be found in America, but also partly because their constitution actively encourages the formation and existence of pressure groups. The decentralisation of the decision making process in America means that there are numerous points for pressure groups to lobby, be it their congressman or their governor. In Britain, pressure groups have less power as there is a greater degree of centralisation and a much stronger party system, so the legislature is able to grant access to the pressure groups it is interested in, such as corporate lobbyists, for example, whilst denying it to groups that are out of favour. Such a system is less in evidence in America. In both Britain and America, most of the power of pressure groups comes from the way that governments are able to analyse the cost, mobilisation and membership of such groups to gauge the strength of public feeling behind an issue, and logically they should act accordingly. It is, however, a common mistake to say that pluralists expect all the power brokers in society to have equal influence on policy makers.5 This helpfully illustrates that pluralists see there to be a balance of power between the state, the media, pressure groups and other institutions such as the courts. ...read more.

Marxists would see the state as complicit and a key part in the oppression of the proletariat. The way in which the governments in the US and the UK ignored calls for better working conditions for centuries, the fact that the minimum wage in Britain has only recently been introduced, the way in which America constantly uses protectionalist trade barriers to impact on foreign workers can possibly be seen as ways in which the states of those two countries have offered small concessions over time to the workers, whilst still maintaining policies which maintain low costs for capitalists at the expense of the workers. Many have argued however that moves such as the NHS and the minimum wage in Britain amount to far more than just concessions, and that the government are interested in worker's welfare. What is clear is that pluralists and Marxists agree in some small ways in their accounts of power in the US and the UK, but that mainly they place completely different emphasis on the role of class and dispersal of power, so their differences are always going to be significant. 1 P Dunleavy and B O'Leary. Theories of the State (Basingstoke: Macmillan. 1987) pp.14 2 Ibid. pp 38 3 Op. Cit. pp. 41 4 R. Dahl, Who Governs? Democracy and Power in an American City (New Haven: Yale University Press. 1961) pp. 279 5 Ibid. pp. 35 6 Ibid. pp. 35 7 T. Eagleton, Ideology: An Introduction (London: Verso publishing. 1991) pp. 89 ?? ?? ?? ?? 0451354 1 ...read more.