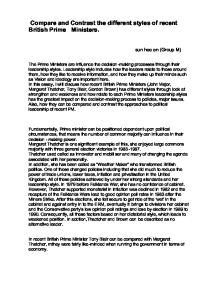 The Prime Ministers are influence the decision-making processes through their leadership styles. Leadership style includes how the leaders relate to those around them, how they like to receive information, and how they make up their minds such as Vision and ideology are important here.

In this essay, I will discuss how recent British Prime Ministers (John Major, Margaret Thatcher, Tony Blair, Gorden Brown) has different styles through look at strengthen and weakness and how relate to each Prime Ministers leadership styles has the greatest impact on the decision-making process to policies, major issues.

Also, how they can be compared and contrast the approaches to political leadership of recent PM.

Fundamentally, Prime minister can be positioned dependent upon political circumstances, that means the number of common majority can influence in their decision - making power.

Margaret Thatcher is one significant example of this, she enjoyed large commons majority with three general election victories in 1983-1987.

Thatcher used called as innovator and mobiliser and many of changing the agenda associated with her personally.

In addition, she has been called as “Weather Maker” who transformed British politics. One of those changed policies including that she did much to reduce the power of trade unions, lower taxes, inflation and privatisation in the United Kingdom. All of these policies achieved by under her strong standards and her leadership style. In 1979 before Falklands War, she has no confidence of cabinet. However, Thatcher supported monetarist in inflation was declined in 1982 and the recapture of the Falklands Wars lead to good opinion poll rates in 1983 after the Miners Strike. After this elections, she felt secure to get ride of the ‘wet’ in the cabinet and against entry in to the ERM, eventually it brings to divisions her cabinet and the Conservative party’s low opinion poll ratings and lose by election in 1989 to 1990. Consequently, all these factors based on her dictatorial style, which leads to weakened position. In addtion,Thactcher and Brown can be described as no alternative leader.

In recent British Prime Minister Tony Blair can be compared with Margaret Thatcher, mthey were fairly like-minded when running the government in terms of economy.

Tony Blair also have large majority in 1997 to 2001 and 2001 to 2005 he leads a united party compared to Thatcher. Tony Blair also seek to innovate and his strong leadership style described as presidential and influenced in making major issues.

For instance, Blair was introduced the “New Labour” and new “Clause 4”.

Furthermore, he as a charismatic and used the media in a way that emphasized himself as the Prime Minister. However, his style (prime ministerial government) has been neglected the cabinet system and he relied on Gorden Brown as the key figures. On this views, Blair has allowed Brown unparalleled power in policy beyond a chancellor’s usual domain. However, in 2005, he faced large-scale rebellions by labour MPs on Iraq, tuition fees and foundation hospitals in his second term.

As a result, his opinion poll rate going down, 2005 elections proved Blair’s commons majority cut from 167 to 66.

Through these significant examples which based on the leadership styles of Tony Blair and Margaret Thatcher approaches can be able to compared.

Firstly, There are greatest difference their views on government intervention.

Unlike Thatcher, Blair raised taxes and he established some laws governing minimum wage and employee rights.

Secondly, another issues that Thatcher’s skillfully management of the cabinet enabled her to cement her authority compared Blair has been refusal apologized the iraq war.

Thirdly, there are similarities between them; Thatcher and Blair were less use of Cabinet but preferred to rely on bilaterals meetings with the head of a department, senior colleagues. Also, growth in the number of special advisers.

Fourthly, they has shown the ability to surmounted overcome a crisis.

Also, Blair, Thatcher has been described as being characterized by strong leadership style. In addition, Tony Blair admires her conviction approach; he has also been heavily influenced by the idea and he accepted Thatchers reform to the economy. Furthermore, Thatcher and Blair are successful use of Cabinet reshuffles.

Among the recent Prime minister, John Major is often described as a weak Prime Minister. His leadership style are completely different between Thatcher and Blair.

He was pursuit balance, definitely a ‘stabiliser’ than mobiliser like Thatcher who contrast with John Major. These all Major personality are appeared in his political approaches. In 1992, he had small majority with a deeply lead to divided party, and poor opinion poll rating. In addition, he balanced between the Pro Europeans and Eurosceptics in his party. Consequently, small common majority cause of Major had less control party than Thatcher.

Secondly, John Major are stand in contrast to Thatcher that including; he did not have the ideological certainty of Thatcher or Blair.

Thirdly, Major are more affable and collegial approach to Cabinet allowed more cabinet debate unlike Thatcher and Blair(less use cabinet). In other word, he used relied on senior cabinet colleagues. But Major held his party together, abandoning the poll tax then won general election and he reassuring national leadership during the “Gulf War”, made better than Thatcher.

The “Black Wednesday” are growing tumult over the Europe, Britain withdrew from the exchange rate mechanism, rising taxes that gravely weakened the Prime minister’s position. Fourthly, Major was failure to overcome a crisis contrast Thatcher and Blair.

The last recent Prime minister is Gordon Brown who was a mobiliser and, serious, substantial politician. However, he had poor communication skills relate to ease with the media, also described as “ totally uncollegiate ” unlike Blair who are good communicator. The banking collapse and economic crisis; he loan money to save bank these example of leadership styles shows that Gordon Browns are strength at finance crisis. In the opinions of royal prerogative power, Gorden Browns are wanted reform royal prerogative power and require parliamentary approval through a declaration of war or the dissolution of parliament. on the other hand, Blair did not accept this interpretation. Blair and Brown can be described as alternative leader.