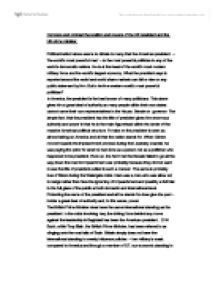 Compare and contrast the position and powers of the US president and the UK prime minister.

Compare and contrast the position and powers of the US president and the UK prime minister. Political instinct alone seems to dictate to many that the American president - 'the world's most powerful man' - is the most powerful politician in any of the world's democratic nations. He is at the head of the world's most modern military force and the world's largest economy. What the president says is reported around the world and world share markets can fall or rise on any public statement by him. But is he the western world's most powerful politician? In America, the president is the best known of many politicians. This alone gives him a great deal of authority as many people within their own states cannot name their own representatives in the House, Senate or governor. The simple fact, that the president has the title of president gives him enormous authority and power in that he is the main figurehead within the whole of the massive American political structure. To take on the president is seen as almost taking on America and all that the nation stands for. When Clinton moved towards the impeachment process during the Lewinsky scandal, he was paying the price for what he had done as a person not as a politician who happened to be president. ...read more.

If things go wrong, then the Prime Minister will be held responsible but if they succeed he will get the spoils of this. It is more difficult for the president to drive domestic policy in America. He announces his platform at his national convention but is not bound by it. Whilst this may give him more freedom to adapt his stated policies throughout his term in office, he cannot guarantee getting them through Congress. As an example, in Britain the main annual budget speech in made in the early Spring. The Chancellor publicly states this in the House of Commons, though with the support of his Prime Minister, and it is then enacted. The only problem in recent years was when outraged Opposition politicians interrupted Nigel Lawson's speech and there were short breaks in the delivery of that budget. But the budget still went through as all do. In America, the president prepares his budget for Congress to scrutinise. But it is Congress that essentially has the final say in that it can reject the president's budget proposals. In reality, much is done behind closed doors to ensure that a very public bill - America's budget for that year - goes through with little apparent public rancour. However, the potential is there for embarrassment for the president. ...read more.

In foreign policy, the president exerts far greater power than the Prime Minister. Britain simply does not have the status that America does at an international level. It seems hard to believe that Colin Powell as Secretary of State, would have received the same treatment in Israel as Britain's then Foreign Secretary, Robin Cook, did when he received a less than polite welcome on a visit to that country. Only America has the necessary power and influence to gather together the necessary support in the United Nations for her foreign policy. However, in domestic issues, the Prime Minister has the advantages in that he as an individual can push through domestic legislation as he is not only Prime Minister but also party leader. The constitutional restraints that are on the president simply do not exist in Britain. The president can veto a bill from Congress but an overuse of this will devalue not only his position but also that of the political structure in America. In Britain, the only thing that can stop a bill becoming law under the current political set-up, is if the Queen refused to give the Royal Assent to a bill that had gone all through the democratic procedures of Parliament. Such an incident is inconceivable. If the Prime Minister has a large parliamentary majority, then he has very extensive powers at a domestic level with probably far fewer restrictions placed on him than a president. ...read more.