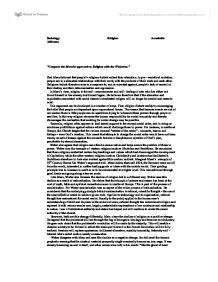 Compare the Marxist approach to Religion with the Weberian.

Sociology Religion Annabelle Atkinson "Compare the Marxist approach to Religion with the Weberian." Karl Marx believed that people's religious beliefs reflect their alienation. In pre - socialised societies, people are in a alienated relationships with their work, with the products of their work and each other. Religious beliefs therefore arise in a response to, and as a protest against, people's lack of control of their destiny and their dehumanisation and oppression. In Marx's view, religion is the self - consciousness and self - feeling of man who has either not found himself or has already lost himself again. He believes therefore that if the alienation and exploitation associated with social classes is eradicated religion will no longer be needed and cease to exist. This argument can be developed in a number of ways. First, religion distorts reality by encouraging the belief that people are dependent upon supernatural forces. This means that because events are out of our control there is little people can do apart from trying to influence these powers through prayer or sacrifice. In this way religion obscures the human responsibility for social inequality and thereby discourages the realisation that working for social change may be possible. ...read more.

He considered that the underlying principle behind modernisation is rational, scientific thought - the use of the most effective means to achieve given ends. Applied to technology and to organisation, rational thought has restructured the social world. Equally to the point, applied to the human race's understanding of itself and its place in the social universe, rational thought has undermined religion and replaced it with various secular and, largely, materialistic explanations of our existence and relationship to nature. Loss of intellectual authority and status has helped and will continue to erode the moral authority of the church. However, both see this change differently. Marx views the decline of religion as a positive change. He argued that the proletariat will see through the fog of bourgeois ideology and become revolutionary. He goes onto claim that the proletariat's revolution will be made by the majority. This will enable a classless society to be formed in which the ideals put forward in the French Revolution will be fully realised: freedom will replace oppression; fulfilment alienation; equality inequality; fraternity self - interest. Marx called such a society communism. ...read more.

Weber's main theoretical point is that ideas can change history, and in doing so can contribute to changes in the material context of life. It will be remembered that the whole trend of Marx's analysis of religious ideas is in the opposite direction. He sees them as primarily as justifying existing social and economic circumstances, and certainly not as providing a major source of historical change. Instead he believes religion was an ideological pall intended to obscure new and different ideas. But Marx did recognise that new ideas could be developed. Human consciousness is able to react thoughtfully and creatively to experience, particularly everyday work experience. Socialism itself had to be "thought of" before it could become a reality. However, for Marx, ideas are formed within, and structured by socio - economic material reality. Socialism can only become possible when society is economically and socially developed to the point where socialist ideas are seen to be realistic. Weber's studies of religion are also important from the methodological point of view. As an exercise in comparative sociology; they rank alongside Durkheim's study of suicide. Weber's conclusion was that the relationship is one of variety. Religion can help to cause change or impede it; it might be used to support the status quo or against it. ?? ?? ?? ?? ...read more.