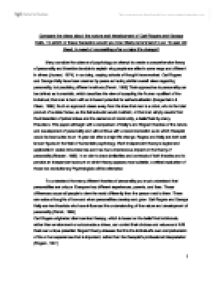 Compare the views about the nature and development of Carl Rogers and George Kelly. To which of these therapists would you most likely recommend to an 18 year old friend, in need of counselling after a major life change?

Compare the views about the nature and development of Carl Rogers and George Kelly. To which of these therapists would you most likely recommend to an 18 year old friend, in need of counselling after a major life change? Many consider the science of psychology an attempt to create a comprehensive theory of personality and therefore be able to explain why people are alike in some ways and different in others (Jourard, 1974). In so doing, varying schools of thought have evolved. Carl Rogers and George Kelly have been deemed by peers as having similar overall views regarding personality, but practicing different methods (Pervin, 1989).Their approaches to personality can be defined as humanistic, which describes the view of accepting the 'human qualities' of the individual; that man is born with an inherent potential for self-actualization (Hergenhahn & Olsen, 1999). Such an approach steers away from the idea that man is a robot, who is the total product of outside forces, as the Behaviourist would maintain; or that man simply results from the interaction of primal drives and the demands of community, a belief held by many Freudians. This paper will begin with a comparison of Kelly's and Rogers' theories of the nature and development of personality and will continue with a recommendation as to which therapist would be best suited to an 18 year old after a major life change. Rogers and Kelly are both well known figures in the field of humanistic psychology. Each independent theory is logical and applicable in varied circumstances and has had a tremendous impact on the theory of personality (Roazen, 1992). ...read more.

Rogers used what is known as the Q-sort technique to qualify the extent to which a client had changed as a function of therapy. In this technique, the client was asked to describe him or herself accurately, and the responses were interpreted as their 'real' self. They were then asked which characteristics they would like to posses, and these responses were labelled as their 'ideal' self. This way the therapist could examine the relationship between their clients' real and ideal self at the beginning, during and after the therapy (Rogers, 1973). Another comparison that can be determined between Rogers and Kelly is their theory on motivation and anxiety. They have been described as adopting the 'jackass' theory of motivation which concerns the nature of the 'animal', not the forces that push it (Maddi, 1996). This understanding is quite dissimilar to both Freudian and Behaviourist techniques which believe in either the push or pull of outside forces to motivate humans and influence personality. Rogers and Kelly have very different points of view regarding anxiety. These differences tie in with their theory on the nature of personality. Kelly believes that anxiety occurs when one cannot predict their future, or when their constructs become vague and unrecognisable. Rogers on the other hand, believes that one becomes anxious when a new situation does not meet with their ideals of self. Both theorists provided the psychological community with many new definitions and solutions to the human personality (Jourard, 1974). In regards to the question of which of these therapists would be most likely recommended to an 18 year old after a major life change, several factors need to be considered. ...read more.

Rogers's therapy techniques are well known and practised worldwide which indicates a common understanding and acceptance within the psychological community (Maddi, 1996). Everyone has his or her own ideas on what the nature and development of personality is, but no one has a definite answer. These two theorists are correct in their views because no one can prove them wrong. Since there are so many variations in personality traits there will never be a definite answer. What may work for one person, may not necessarily work for the next. Carl Rogers and George Kelly have laid a foundation for personality theories and have offered relevant, alternative methods to psychotherapy (Pervin, 1989). Kelly provided an applicable description as to how humans perceive their environment and how this affects personality. Rogers offered an approach to therapy which emphasises the individuals' importance to achieve his or her ideal self. The surface proposals by each of these therapists are in fact quite similar, but when researched deeper, are actually very different. Each therapist must imagine what the world is like through the clients eyes and construct what they see as an answer to their problems. The client discussed in this paper would be more suited to the techniques of Carl Rogers. Rogers' pervasive interest in therapy is what clearly differentiates him from Kelly, despite some similarities in their ideas. Carl Rogers and George Kelly provided the psychological community with revolutionary theories on the nature and development of personality. There is no doubt that each theory will continue to inspire research into the future. As human beings and their nature evolves, so too will the personality theories that accompany them. ...read more.