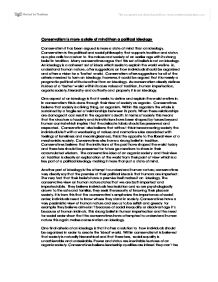 Conservatism is more a state of mind than a political ideology

Conservatism is more a state of mind than a political ideology Conservatism it has been argued is more a state of mind than an ideology. Conservatism is the political and social philosophy that supports tradition and status quo plus calls for a return to the values and society of an earlier age with its strong belief in tradition. Many conservatives argue that this set of beliefs is not an ideology. An ideology is a coherent set of ideas which seeks to explain the world we live in, understand human nature, offer suggestions on how individuals should be organized and offers a vision for a 'better' world. Conservatism offers suggestions for all of the criteria needed to form an ideology; however, it could be argued that it is merely a pragmatic political attitude rather than an ideology. As conservatism clearly defines its idea of a 'better' world within its core values of tradition, human imperfection, organic society, hierarchy and authority and property it is an ideology. One aspect of an ideology is that it seeks to define and explain the world we live in. ...read more.

Another part of ideology is the attempt to understand human nature; conservatives very clearly say that the premise of their political ideas is that humans are imperfect. The very fact that their beliefs have a premise itself makes it an ideology. The conservative view on human nature states that we are both imperfect and imperfectable. They believe individuals fear isolation and so are psychologically drawn to the safe and familiar, they seek the security of knowing their place in society. It is from this that the conservative's emphasize the importance of social order; individuals need to know where they stand in society. Conservatives have a very pessimistic view of human nature and see us to be selfish and greedy for example they believe crime isn't because of social inequality or disadvantage it's because of human instincts. This strong belief in human imperfection and the need for social order show that the conservatives have attempted to understand human nature this again makes conservatism an ideology. One final criteria of an ideology is that it offers a solution to how individuals should be organized in order to create the 'ideal' world. ...read more.

It also believes in individual liberty and the defence of freedom from the state. The idea of a free economy and a lesser state are set out in strict guidelines within the new right's policy. Having such a strict set of rules on the economy and society simply proves even further that Conservatism is an ideology; the new right are setting out policies on how to in their opinion fix the world, a characteristic of an ideology. An argument against conservatism being ideological is that it is simply a political attitude in defense of the status quo. Conservatism only wants to defend the institutions from the past and make sure they are kept for the generations of the future, its emphasis on historical principles and experience make it simply a political attitude. Many different groups are considered to be conservative, in the sense that they support tradition but have no conservative political views at all for example socialists who campaign for the welfare state could be considered conservative in their actions but not in their political beliefs. In conclusion conservatism clearly is an ideology. It has a set of political beliefs which define human nature, explain society and attempt to show a solution on how to organize individuals to make the world a better place. ...read more.