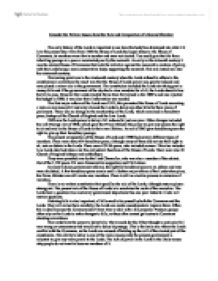 Consider the Political Issues about the Role and Composition of a Second Chamber.

Consider the Political Issues about the Role and Composition of a Second Chamber The early history of the Lords is important to see how this body has developed into what it it is to this present day. Even from 1500 the House of Lords had equal status to the House of Commons, its members were few in number and were not elected. You could gain the title from inheriting peerage to a peer or nominated peer by the monarch. As early as the sixteenth century it was the elected House of Commons that took the initiative against the monarch in matters of policy, with the Lords being a more conservative body, supporting the monarch. This role lasted well into the nineteenth century. The turning point was in the nineteenth century when the Lords refused to adhere to the constitutional convention the result was that the House of Lords power was greatly reduced and now played a minor role in the government. The constitution included the Lords not taking part in money bills and if the government of the day had a clear mandate for a bill, the Lords should allow the bill to pass. ...read more.

A few hereditary peers remain until a further major reform of the Lords takes place, the Prime Minister can still create new members. There is still no elective process in omission of members. There is no written constitution that specifies the role of the Lords, although custom plays a strong part. The present role of the House of Lords is to scrutinise the work of the executive. The Lords have a question time and every government department has one peer linked to it who will answer questions. Debating bills is also important; all bills need to be passed by both the Commons and the Lords. They will revise them carefully; the Lords can make amendments to improve them. Often this is done because the Commons don't have time to deal with a bill properly. Pressure groups often rely on the Lords to make changes to bills, as they often cannot get access to Commons standing committees. The Lords have the power to delay bills. They would do this if they thought a particular bill was wrong or unnecessary and would act to delay its passage. ...read more.

This is also another way of bringing possible talent into the government. There are many issues surrounding the composition and roles of the Lords government. The main criticism is the method of selection. In particular hereditary peerage, why should you be in Lords because your great grandfather was a brilliant general? Or your farther had the money to buy a peerage from Lloyd George in 1921. Also being the being a man's eldest son is not a good criterion. The system appears particularly r****t and s****t, with very few women and members of ethnic minorities. The Lords discriminates on religious grounds too, because there are only Church of England bishops, with no Catholic bishops or elders of any other faith. The Conservatives tend to dominate, and many hereditary peers only come to the Lords when requested by Conservative whips to vote for Conservative measures. The Lords do not appear to do much, they appear relatively powerless, and much of their work in the legislative process is what the Commons really should be doing. With regard to payments to the peerage - although they are not paid, they receive a generous attendance allowance. They do not have to vote, speak or take part in any way to receive these payments. ...read more.