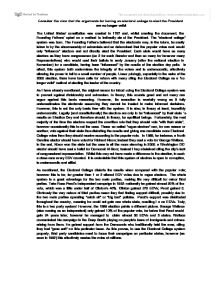 Consider the view that the arguments for having an electoral college to elect the President are no longer valid The United States' constitution was created in 1787 and, whilst creating the document, the Founding Fathers' opted on a method to indirectly elect the President. The "electoral college" system was born. The Founding Fathers believed that the electorate may, in the future, be easily taken in by the showmanship of extremists and so determined that the popular votes cast would only "influence" electors and not directly elect the President. Each state would have as many electors as they have congressmen (so 2 for each Senator and then so many for however many Representatives) who would cast their ballots in early January (after the national election in November) for a candidate, having been "influenced" by the results of the election day polls. In effect, this system both undermines the integrity of the voters and is undemocratic, effectively allowing the power to fall to a small number of people. Unsurprisingly, especially in the wake of the 2000 election, there have been calls for reform with many citing the Electoral College as a "no longer valid" method of electing the leader of the country. As I have already mentioned, the original reason for introducing the Electoral College system was to prevent against dictatorship and extremism. ...read more.

What can be done about this is uncertain, as ECVs cannot be taken away as they are mandated by the number of congressmen. This in itself is another flaw in the system, in that the ECVs are allocated according to representation rather than direct population. However, this can be considered to be a positive, given that it means the small states still "have a voice" aren't drowned out by the larger states. Finally, the "winner-takes-all" system further distorts the result, which was especially seen in the infamous 2000 election. In said election, Al Gore actually gained 48.4% of the popular vote, compared with Bush's 48%: not a huge difference but still, technically, more people voted for Gore than Bush. However, the Electoral College system resulted in Bush gaining 271 votes to Gore's 266. This was the first instance of such an event occurring in over 100 years and, unsurprisingly, sparked off a new national debate over the system. Technically, this system is therefore undemocratic and, once again, takes the power away from the people: if this were an example of direct democracy, Gore would have won the election. However, this is not to say that the Electoral College system has no good points; after all, it was created for a reason and has survived the best part of 250 years. ...read more.

Finally, a system of proportional representation could be adopted at state level. This would be deemed to be fairer and along similar lines to a direct election, but without many of the problems the latter brings. Furthermore, it would more fairly represent third parties, especially when considering Ross Perot's 20% of the vote compared to his 0 ECVs in 1992. However, such a system would encourage more to vote for these smaller parties probably resulting in no party gaining an absolute majority. Like any other reforms this brings with it disadvantages, however these need to be weighed accordingly to its pros. The Electoral College system is never going to be deemed perfect and it is unlikely it ever has been. However, it has served the country well for almost 250 years and the main reasons why people wish to change it seem fluid and inconclusive. Moreover, the reforms, at least on paper, do not sound to work as well as the EC system especially when considering that only 3 times in the nation's history as the present system extremely distorted the result. Sure, the original reason for creating the Electoral College is no longer as valid as it once was, but this is not to say that the system hasn't adapted to modern times and it's certainly not to say that it should be done away with all together. ?? ?? ?? ?? ...read more.

Overall this is a very good essay. Although there is still room for improvement, the main points are well explained and good examples are used to highlight the points being made. Although analysis is quite good the evaluation could be better in places.