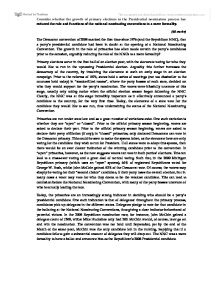 Consider whether the growth of primary elections in the Presidential nomination process has reduced the role and functions of the national nominating conventions to a mere formality. (40 marks) The Democrat convention of 2008 marked the first time since 1976 (and the Republican NNC), that a party's presidential candidate had been in doubt at the opening of a National Nominating Convention. The growth in the role of primaries has often made certain the party's candidates prior to the occasion, arguably reducing the role of the NNCs to a mere formality? Primary elections occur in the first half of an election year, with the electorate voting for who they would like to run in the upcoming Presidential election. Arguably this further increases the democracy of the country, by involving the electorate at such an early stage in an election campaign. Prior to the reforms of 1976, states held a series of meetings (not too dissimilar to the caucuses held today) in "smoke-filled rooms", where the party bosses of each state, decided on who they would support for the party's nomination. The voters were blissfully unaware of this stage, usually only taking notice when the official election season began following the NNC. ...read more.

Candidates may appear on TV news shows such as NBC's influential "Meet the Press" or "The Capital Gang" on CNN. These programmes have in-depth interviews which are a great opportunity for candidates to get "their name out there" and gain support, prior to the official campaigning season. Chat shows such as "The Late Show" give candidates a chance to show their more human side and appeal to the more "style-conscious" voters. Candidates may prepare and deliver formal speeches (free from party endorsement) to possible supporters; others may write a book in which they give across their key policy ideas (e.g. Barack Obama's "Audacity of Hope" in 2008). With sufficient marketing, books can give a candidate a good foothold with the more politically-aware electorate. Public feeling and comments made in the media give a good indication of the strongest candidates with the highest chance of gaining a party nomination. In 2000, helped by his role as incumbent Vice-President, Al Gore gained a lot of popular support during the invisible primaries, going on to easily win the Democrat's nomination. The main role of the National Nominating Conventions have undeniably decreased in recent years, with in many cases the event simply been a confirmation of the leading candidate. ...read more.

This arguably worked as he enjoyed a boost of 7% points the following day. The conventions also formally announce the candidate for Vice-Presidency. This, however, attributes to the argument that NNCs are now a mere formality, as these are almost always known beforehand. Having said that, the less politically aware voters may be encouraged to vote for a particular candidate on the basis of their running mate, alone. In 2008, for instance, John McCain gained a large proportion of the female vote following the Democrat convention (and the announcement of Barack Obama as their candidate) and the loss of Hillary Clinton. McCain's running mate was, of course, Sarah Palin. There is no doubt that the National Nominating Conventions will continue for many years to come, however their role and purpose has changed significantly since their formation. The traditional idea of them been the stage to announce a party's candidate to the country, for the first time, is long gone since the advent of primaries and the media. However, calling them a "mere formality" is misleading as they serve a very important purpose of brining in voters and giving across the party's message. Yes, their role has changed, but it has changed for the better. ?? ?? ?? ?? ...read more.