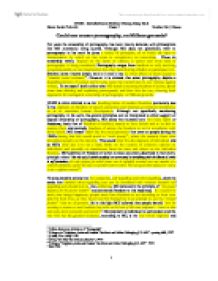 Could one censor p*********y, on Millean grounds? For years the censorship of p*********y has been heavily debated, with philosophers like Mill commonly being quoted. Although Mill does not specifically refer to p*********y in his work he gives a variety of principles, all of which are open to interpretation, by which we can come to conclusions on censorship. Views on censorship mainly depend on the harm or offence it causes and what kind of p*********y is being considered. p*********y ranges from hardcore to soft, involving consenting adults on one hand and on the other hand forcing children to participate in it. Similarly some viewers simply look at it and it has no other effect on them except to "stimulate s****l excitement"1. However it is claimed that some p*********y depicts a degrading picture of women and in some cases has incited men to use violence against women. In my essay I shall outline what Mill stated concerning freedom of action, spend some time defining and explaining p*********y and then link the two, showing both arguments for and against censorship of p*********y on Millean grounds. J.S.Mill is often referred to as the founding father of modern liberalism particularly due to his emphasis on freedom of speech and action and minimal government interference so as to maximise human development. ...read more.

Many would even go as far to say that there is no such thing as a self-regarding act as "no action, however intimate, is free from social consequences"10. Therefore as p*********y does have consequences on society, most of which people believe are bad, it should be censored. One could also argue that Mill being a utilitarian would censor p*********y as it does not bring happiness and therefore is a wrong action. Ryan admits that "the utilitarian must admit there will be cases where people are made happier by giving them less freedom rather than more"11 and therefore censoring p*********y might be right. However Mill believes that we all search for a higher truth in our actions in regard to mortality and that is why they should not be interfered with as it is an "invasion of liberty which thwarts the development of human individuality"12. p*********y, though, is not about great moral and philosophical truths, does not help individuals develop and has no real value except to satisfy people's base lusts in life. Therefore as it is a lower physical pleasure, perhaps one can argue that Mill would censor it as it is not beneficial to society's progress. ...read more.

And this would mean the state would start to claim to be "an infallible guide on such matters"22 which is dangerous. Thus many like Brannon Miller believe that Mill would not support censoring because "informal sanctions of society"23 and "oppressive legal controls"24 would inhibit people's individual liberty. And if the government is given a freer hand in interfering with society in more trivial issues such as p*********y it might then lead to further interference in more important issues in society. There is also the minor issue that it would be very hard for a government to censor p*********y today due to the most common medium being the Internet, which is extremely difficult to control. Although personally I would myself censor p*********y and perhaps even ban it given half a chance, I have to agree that from reading Mill, on his grounds you probably would not censor p*********y. This would mainly be because it does not fulfil his principle of interference if there is harm and I do agree that he is referring to direct harm rather than "potential harm"25, however narrow that view may be. Censoring p*********y would restrict people's liberty to act as they please and also curtail the happiness of those who find enjoyment in the baser, lower pleasures of life. ...read more.