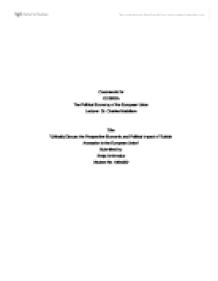 &quot;Critically Discuss the Prospective Economic and Political Impact of Turkish Accession to the European Union&quot;

Coursework for EC0902A The Political Economy of the European Union Lecturer: Dr. Charles Maddison Title: "Critically Discuss the Prospective Economic and Political Impact of Turkish Accession to the European Union" Submitted by: Sonja Ambrosius Student No. 0404332 'Turkey is part of Europe.' (Walter Hallenstein, 1963) 'Is Turkey European?' (Claude Cheysson, 1984) Introduction These two quotes give a good start for an essay about the prospective political and economical effects of an accession of Turkey to the European Union (EU). In 1963 Turkey signed the European Association agreement, normally seen as a prelude to membership, as the second country ever. The Ankara agreement included three phases which would bring Turkey to full economic integration in the EU. Nowadays it seems like the process got stuck and some members of the EU, like the quote of the former French minister for foreign affairs shows, feel less attached to the thought of Turkey as a member of the EU then people did in 1963. Turkey has a customs Union with the EU and the status of an associate member since 1963. Turkey first applied to fully join the EU in 1987. The stumbling of the integration of Turkey found its peak in 1997 at the European Council Summit in Luxembourg where accession negotiations were opened to all applicants except Turkey. The Turkish reaction was not to participate in the European Conference in London 1998. This led to reinforcement of Turkeys membership and in 1999 Turkey was finally accepted as candidate for full membership. ...read more.

These requirements led to a constitutional change in October 2001 which ensured the prevention of torture, freedom of speech, freedom of association, and equality between men and women. The influence of the military has been reduced and the death penalty abolished. Yet it can't be finalized if the constitutional changes have been fully adopted (Dorronsoro, 2004). The European enlargement minister G�nther Verheugen at his visit to Ankara in September of this year pointed out that the implementation of the new laws is similarly important as passing them. Also further improvements have to be made regarding the rights of the Kurdish population and the freedom of religion. The new rights for the Kurds are just a beginning and it is still nearly impossible to open up a non-islamic church in Turkey (The Economist, 18.09.2004). The political effects Turkey could have on the EU are rather high. It is expected that by 2020 the Turkish population will exceed the German and by that Turkey will become the 'biggest' member of the Union. That will give it a strong vote in the Council's double-majority voting system. Still it would need cooperation of all the 'big players' in the EU to block or influence the decision process in the EU institutions. In the European Commission the influence would be equal to that of all others. The influence in the Parliament would be bigger but still wouldn't necessarily require a restructuring of this Institution as the stability would still be guaranteed (Hughes, 2004). Furthermore a big issue is Turkey being an Islamic country. ...read more.

On the other hand the public opinion inside the EU is very critical about that issue as the following quote summarizes: "EU politicians face one of the toughest decisions they have ever had to take. If they say no to Turkey, they risk alienating a key ally in the Muslim world with unpredictable consequences. If they say yes, they may upset many voters at home who are already unhappy about where the EU is going" (http://news.bbc.co.uk/1/hi/world/europe/3719418.stm) This December the European Council meeting will have to decide about the opening of accession talks with Turkey. At the current status of the Turkish reforms there is hardly a possibility to say no. Compared to other former applicants Turkey has reached a status that exceeds what others have reached. Furthermore to reject Turkey would have a negative influence as a sign to the Oriental world, that a prosperous Islamic country is not acceptable for the EU. As long as the EU is strong enough to demand the necessary changes that have to made to guarantee a stable democracy, this could only have positive results in a troubled region which is at least close to Europe if not within. Literature Dinan, Desmond, 2004:Europe Recast, A History of European Union; Palgrave Macmillan, Hampshire Dorronsoro, Giles, 2004: The EU and Turkey, Between geopolitics and social engineering in: European Union Foreign and Security Policy by: Roland Dannreuther (edt.), 2004; Routledge, London Hughes, Kristin, 2004: Turkey And The European Union: Just Another Enlargement? Exploring The Implications Of Turkish Accession; http://www.friendsofeurope.org/pdfs/TurkeyandtheEuropeanUnion-WorkingPaperFoE.pdf Unknown, 2004: The impossibility of saying no; The Economist 18.09.2004, p. 32-34 Webpages in order of appearance: http://news.bbc.co.uk/1/hi/world/europe/3720506.stm, 08.11.2004 http://www.europa.eu.int/scadplus/leg/de/lvb/l34003.htm, 08.11.2004 http://news.bbc.co.uk/1/hi/business/3712804.stm, 08.11.2004 http://news.bbc.co.uk/1/hi/world/europe/country_profiles/1022222.stm#leaders, 08.11.2004 http://news.bbc.co.uk/1/hi/world/europe/country_profiles/1022222.stm, 09.11.2004 ...read more.