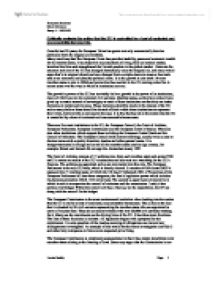 Critically evaluate the notion that the EU is controlled by a host of unelected and unaccountable bureaucrats.

Critically evaluate the notion that the EU is controlled by a host of unelected and unaccountable bureaucrats. Over the last 50 years, the European Union has grown not only economically but also politically from the original six members. Many would say that The European Union has provided stability, peace and economic wealth for its member states. It has helped to raise standards of living, built an internal market, launched the Euro and strengthened the Union's position in the global market. However the structure and size of the EU has changed dramatically since the original six, and many would argue that's its original objectives have changed from a simple desire to create a free trade area to an economic and possibly political union. It is this growth in size (with 10 more member states to join in 2004) and power that has resulted in the EU coming under fire in recent years over the way in which its institutions are run. The growth in power of the EU has inevitably led to a growth in the power of its institutions, many of which are run by unelected civil servants. Member states, as they have joined, have given up a certain amount of sovereignty to each of these institutions so that they can make decisions on certain policy areas. These decisions should be made in the interest of the EU and so many believe there should be elected officials within these institutions to represent their views, however this is not usually the case. It is this that has led to the notion that the EU is controlled by a host of unelected and unaccountable bureaucrats. ...read more.

There is no real forum for holding the European Commission to account. Also the bankers who run the ECB are accountable to no one and cannot be removed no matter what the effects of their decisions are. Many believe that Europe cannot continue to be governed by civil servants and ministers behind closed doors in Brussels. Conservative leader, Iain Duncan Smith is amongst those that believe this he stated that " The Eu's centralised structures represent a costly and ineffective compromise between the supranational and the intergovernmental. Europe should be more transparent and more accountable to the people who pay for it, founded on a co-operation between nations not supranational institutions." (Telegraph Website). The core of this debate is arguably centred around those institutions which are more powerful than those run by elected MEP's. The Commission as already mentioned is seen as the driving force of the EU. It is an executive body and initiates new laws. However the Council of Ministers, also unelected has a main role of passing laws, this highlights the power of unelected officials who are making decisions on our behalf, and are accountable to no one if the decisions are deemed to be inappropriate. Coreper do all the civil service work behind the scenes. The ECB also seems to support the notion as it is run by unelected financiers who have control over the monetary union which is arguably the most powerful institutions in Europe. Evidence of the power held by institutions such as the Commission can be found when looking at the Commissions handling of the Competition policy. The European Commission blocked the $45bn deal between US firms General Electric (GE) ...read more.

This highlights the move towards a more supranational power, as with QMV a majority decision will be enough to pass a law or treaty. The majority is decided by population at least 60 % of the population of Europe will be accepted as a majority vote. This may lead to smaller countries having less power as it is likely that they can't all agree and a*s a law without the support of at least one of the 'big five' such as Germany, France or the UK. This could mean that no individual nation would be able to alter the laws by which it is governed. It would put the making of these laws beyond member states, surrendering them to a supranational and unaccountable body. However UK Prime Minister, Tony Blair has insisted that he will not allow the new European constitution to diminish British sovereignty especially in the areas of defence, tax and foreign policy. (BBC news website.) Having weighed up each side of the debate and investigating the power each institution holds, I would conclude by agreeing in principle with the notion that the EU is run by a host of unaccountable and unelected bureaucrats. However this is not to say that this is a necessarily a negative issue, as there is no guarantee that elected officials would be more suitable representatives. Civil servants are usually highly skilled professionals and so many would agree that they may be the best for the job. So although I agree with the notion I accept the fact that having elected and accountable officials instead of unelected civil servants , will not always guarantee that the citizens of Europe will have a say in the running of the EU, or that their views would be represented. ...read more.