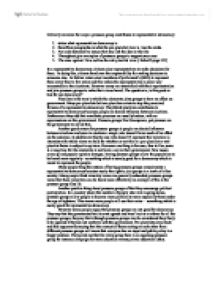 However one thing is for sure, four to five years is a long time for the electorate to not have a say in their government. New issues come up and popular opinion changes, having pressure groups allow the population to be heard more regularly - something which is surely good for a democracy which is meant to represent the people. Many people thing the system of having pressure groups complements a representative democracy because surely the right to join groups is a mark of a free society. Many people think minority voices are generally unheeded; pressure groups mean that these minorities can be heard more effectively an example of this is the pressure group Gay lib. Another positive thing about pressure groups of that they encourage political participation. In a country where the number of people who vote is going down, pressure groups allow people to become more politically aware especially those under the age of eighteen. ...read more.