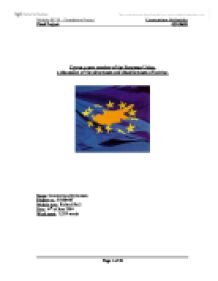 Cyprus a new member of the European Union, a discussion of the advantages and disadvantages of joining.

Cyprus a new member of the European Union, a discussion of the advantages and disadvantages of joining. Name: Constantinos Stylianides Student no.: 03109693 Module tutor: Richard Haill Date: 14th of June 2004 Word count: 3,253 words Contents PAGE 1. Introduction 3 1.1. Description of Topic 3 1.2. The main sources of investigation 3 1.3. Aims of the Project 3 2. Main Body 4 2.1. Brief history of Cyprus after 1960 4 2.2. The failure of the UN mission in Cyprus 5 2.3. The European Union 5 2.3.1 Application of Cyprus to join the EU 6 2.3.2 Relations between Cyprus and the EU 6 2.4. UN's reunion Plan for Cyprus 7 2.5. Cyprus becomes a Member of the EU 7 2.5.1. Advantages 7 2.5.1.1. Political benefits from the entry to the EU 8 2.5.1.2. Economic advantages of the Membership 9 2.5.2. Disadvantages 10 2.5.2.1. Economic disadvantages 10 2.5.2.2. Political disadvantages 11 2.5.2.3 Social disadvantages 12 3. Conclusion 13 3.1. The, key points of the project 13 3.2. A personal view 13 4. Appendix 14 5. References 17 1. Introduction 1.1. Description of the topic Cyprus has always been a part of the European family. The goal of joining the EU is a natural choice for Cyprus. On 1st of May 2004 ten new countries joined the European Union (EU), one of those was Cyprus. Cyprus is very well known because of its problem, with Turkey's invasion of the north part of the island in 1974. I have chosen to write about my country where I have been living all my life. The subject is very topical because this year Cyprus has been writing some very important pages in its history book, with its joining the EU, and also many other countries are talking about it. It's a very interesting topic because Cyprus is a country where since the past was always in trouble. Cyprus is a divided country, occupied from Turks, and it makes it special because its capital, Nicosia, is the only remained divided capital in the world. ...read more.

* The provision of EU citizenship to the citizens of Cyprus is a very important aspect. People are now able to travel through Europe without passport and any other obstacles. Many fees have been decreased, with an example the University fees, and this will lead many Cypriots to study abroad to the EU. 2.5.1.1. Economic advantages of Membership With the entry of the whole island to the EU, except for the political benefits, the economy of the island will be get better, the most important economic advantages are: * Firstly, Cyprus' goods and services have access to a huge single market in Europe; this is expected to lead to an increase of Cyprus' exports to the EU countries. * The participation of Cyprus in the Union's internal market, an area where free movement of goods, services, and persons are ensured, will make Cyprus' goods more popular in the EU market. In addition Cyprus could export a larger amount of products to the EU, and this will lead to an additional external income to the Cypriots producers. (European Commission, 2004) * In addition, there will be share in the growth and development of the EU economy. * With the adoption of euro (in 3 years) and participation of Cyprus in the Economic and Monetary Union (EMU), is expected to lead to a general rise in the prices of services and goods and lower interest rates, thus resulting in stronger confidence of the economic actors, increased investment and higher growth rate. (Office of the Coordinator for Harmonisation, 2003) Furthermore, participation in the EMU should boost Cyprus' exports, considering the reduction of transaction costs which will result from the ending of both the exchange risk and the cost of converting the local currency to euro in transactions with other members of EMU. (Office of the Coordinator for Harmonisation, 2003) A whole range of advantages are expected, covering most areas of business and life in general. The laws and standards will in most cases be upgraded and modernized. ...read more.