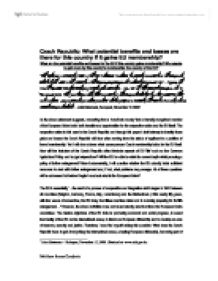 Czech Republic: What potential benefits and losses are there for this country if it gains EU membership?

Czech Republic: What potential benefits and losses are there for this country if it gains EU membership? What are the potential benefits and losses for the EU if this country gains membership? Who stands to gain more by this country's membership; the country of the EU? "The Ministers of Foreign Affairs of the six Candidate Countries negotiating accession to the European Union on the basis of the decisions of the Luxembourg European Council in December 1997 - Cyprus, the Czech Republic, Estonia, Hungary, Poland and Slovenia - met for the third time in Budapest on 15 November 2000. They reconfirmed that their accession to the European Union is not only crucial for their own countries but a well-managed enlargement is an integral part of realizing the vision of a strong and efficient European Union." - Joint Statement, Budapest, November 15 20001 As the above statement suggests, converting from a 'candidate country' into a formally recognized member of the European Union holds both benefits and opportunities for the respective nation and the EU itself. The respective nation in this case is the Czech Republic and through this paper I shall attempt to identify those gains and losses the Czech Republic will face when moving from the status of applicant to a position of formal membership. Yet I will also address what consequences Czech membership holds for the EU itself. How will the inclusion of the Czech Republic affect intricate aspects of EU 'life' such as the Common Agricultural Policy and budget expenditure? Will the EU be able to retain its current depth whilst pursuing a policy of further enlargement? More fundamentally, I will question whether the EU actually holds sufficient resources to deal with further enlargement and, if not, what problems may emerge. All of these questions will be addressed but before I begin I must ask what is the European Union? The EU is essentially '...the result of a process of cooperation and integration which began in 1951 between six countries (Belgium, Germany, France, Italy, Luxembourg and the Netherlands.) ...read more.

My first point is concerned with the notion of 'supranationalism.' Whilst many academics have embraced the assumption that the EU will eventually resemble a 'United States of Europe' with all the democratic trimmings embodied in the EU's American sibling I disagree. The centralized and largely unaccountable position of the European Commission places serious doubts over issues such as national sovereignty and the rights of citizenry. For the Czech Republic this may cause several problems. For example, how would the Czech Republic object to policy which may affect its national interests? This is particularly relevant when you consider the following statement issued by the European Commission itself: "The original and essential source of the success of European Integration is that the eu's executive body, the Commission, is supranational and independent from national, sectoral, or other influences (my italics). This is at the heart of its ability to advance the interests of the European Union.11" Perhaps the Czech population has already realized such a threat against national interests. A recent poll indicated that only 39% of Czechs would currently vote to join the EU in contrast to 19% who would vote out-right against joining. With the Communist and Civic Democratic Party also voicing 'Euro-skepticism' the political and popular support looks increasingly thin and with the Czech Republic now expecting to join June 2004 in time for the European Parliament elections this could be portrayed as a negative factor.12 An example of this point is Czech authorities having to implement British immigration checks despite opposition from not only the Czech population, but also Czech President Vaclav Havel. The only reason such opposition has been kept quiet is because "...it would be seen as a major setback for Czech efforts to join the European Union..."13 Therefore a serious loss for the Czech Republic may be less importance attached to immediate Czech interests, priority instead going to the EU 'state' as a whole. ...read more.

For the EU priority lies with developing a strategy so that this time can be used to ensure the continual depth of EU institutions and EU 'life'. 1 Joint Statement - Budapest, November 15, 2000. Obtained at: www.mfa.gov.hu 2 The ABC of the European Union, The European Union Online. Obtained at: http://www.europa.eu.int 3 Ministry of Foreign Affairs of the Czech Republic. Obtained at http;//www.mzv.cz 4 The Benefits of Enlargement, Speech by FCO Minister for Europe Peter Hain. Tuesday, 24 July, 2001. Obtained through: http://www.zeit.de 5 Centre for Economic Policy Research. Obtained at: http://www.cepr.org 6 PHARE is one of three pre-accession instruments financed by the EC to assist the applicant countries of central Europe in their preparations for joining the EU 7 The Effects of the Union's policies of Enlargement to the Applicant Countries of Central and Eastern Europe. Obtained at: http://www.eubfn.com 8 The Challenge of EU Enlargement, Center for European Reform, CER 2000. Obtained at: http://www.cer.org.uk 9 The costs and Benefits of EU enlargement Centre for Economic Policy Research. Obtained at: http://www.cepr.org.uk 10 Enlargement Strategy Paper. http://europa.eu.int 11 April 2000 White Paper, "Reforming the Commission". As quoted in: Europe in the Balance, Lee A. Casey and David B.Rivkin Jr. Policy Review Online: www.policy review.org 12 First eastern members will join in June 2004 in what academics are now referring to as the 'Big Bang' enlargement, which will include ten members (Bulgaria and Romania will not be in this cast.) Refer to: Heading for a Big Bang, Prospects for EU enlargement, according to the Commission's progress reports, Heather Grabbe,CER, 13 November 2001: http://www.cer.org.uk 13 UK re-imposes Czech asylum controls, 08/27/01. Article obtained at: www.bbc.co.uk 14 Immigration Laws: May 2001 - Number #7. Obtained at: http://www.migrationint.com 15 Highlights from the 2001 EC Regular Reports. Obtained through Transitions Online (TOL.) 16 The Effects on the Union's policies of Enlargement to the Applicant Countries of Central and Eastern Europe: http://www.eubfn.com ?? ?? ?? ?? Matthew James Goodwin ...read more.