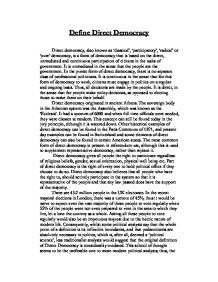 Define Direct Democracy. What are the advantages and disadvantages of referendums?

Define Direct Democracy Direct democracy, also known as 'classical', 'participatory', 'radical' or 'pure' democracy, is a form of democracy that is based on the direct, unmediated and continuous participation of citizens in the tasks of government. It is unmediated in the sense that the people are the government. In the purest form of direct democracy, there is no separate class of professional politicians. It is continuous in the sense that for this form of democracy to work, citizens must engage in politics on a regular and ongoing basis. Thus, all decisions are made by the people. It is direct, in the sense that the people make policy decisions, as opposed to electing those to make them on their behalf. Direct democracy originated in ancient Athens. The sovereign body in the Athenian system was the Assembly, which was known as the 'Ecclesia'. It had a quorum of 6000 and when full time officials were needed, they were chosen at random. This concept can still be found today in the jury principle, although it is watered down. Other historical examples of direct democracy can be found in the Paris Commune of 1871, and present day examples can be found in Switzerland and some elements of direct democracy can also be found in certain American states. ...read more.

The constant threat of having proposals defeated does not just give voters a mouthpiece, it may also stop politicians taking voters and citizens for granted. Whilst it is occasionally embarrassing for the government, perhaps this is a small price to pay for ultimately seeing what the citizens they are there to represent do, and do not like. Another advantage of referendums is their ability to settle conflict-ridden issues within government. For example, in 1975, the Labour government, as well as the Conservative opposition, were divided on whether Britain should remain in the European Community. The Prime Minister at the time, Harold Wilson, held a referendum which was heavily supported, winning 66% of the referendum vote. This helped to prevent such a controversial issue from becoming divisive and preventing the government from being productive. In fact, quite recently, in 2010, the Conservatives and Liberal Democrats were negotiating a coalition government. During these negotiations the Conservatives opposed a voting reform, whilst the Liberal Democrats wanted one. They decided to hold a referendum, and let the people decide, shifting the decision away from government, into the hands of the people. Therefore, referendums are particularly helpful in combating adversary politics. Penultimately, referendums entrench constitutional change. Whilst in theory there is no policy that can prevent parliament repealing the changes, they are effectively entrenched. ...read more.

Referendum campaigns are expensive operations, thus there is a considerable danger that one side will succeed simply because they have more money. For example, in 1975, in the referendum for entering the European Community, the side that won spent far more money then the side that lost. Even if direct democracy is seen as more democratic, this inevitable flaw is irrefutably undemocratic, and would therefore be a step backwards. My final point is one that John Stuart Mills would state is the most serious and severe rejection of referendum use. It is Mills' idea of the tyranny of the majority. In a referendum, the majority wins, thus referendums are a clear example of government by the majority. The minority that loses is not accounted for and elected representatives therefore have a solid platform to weigh up the interests of the majority against the interest of the minorities. However, democracy is supposed to protect our freedoms, liberties and rights. Furthermore, it is simply undemocratic for minorities to feel discriminated against and unaccounted for. When voting for a referendum, you simply state 'yes' or 'no'. There is no place for comment. However, our representatives have a forum for debate and discussion and, when making decisions, can take minorities into account in a way that referendum verdicts simply cannot. For example, it would be na�ve to sat that a 'yes' or 'no' response would be a sufficient response when discussing euthanasia, taxation or abortion. ...read more.