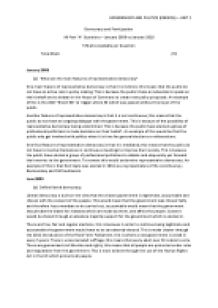 Transfer-Encoding: chunked ﻿GOVERNMENT AND POLITICS (EDEXCEL) ? UNIT 1 Democracy and Participation All Part ?A? Questions ? January 2009 to January 2010 5 Marks Available per Question Total Mark: /15 January 2009 1. What are the main features of representative democracy? One main feature of representative democracy is that it is indirect; this means that the public do not have an active role in policy making. This is because the public chose an advocate to speak on their behalf and to debate in the House of Commons to create new policy proposals. An example of this is the 2017 ?Brexit Bill? to trigger article 50 which was passed without the input of the public. ...read more.

To remove this would undermine representative democracy. An example of this is that Neil Coyle was elected in 2016 as a representative of the constituency; Bermondsey and Old Southwark. June 2009 1. Define liberal democracy. Liberal democracy is built on the view that the chosen government is legitimate, accountable and chosen with the consent of the people. This would mean that the government was chosen fairly and therefore has a mandate to be carried out, accountable would mean that the government should take the blame for mistakes which are made by them, and affect the people. Consent would be shown through an absolute majority support for the government which is elected in. ...read more.