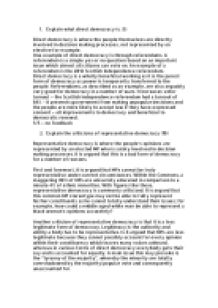 Democracy and the British Voting System.

﻿1. Explain what direct democracy is. (5) Direct democracy is where the people themselves are directly involved in decision making processes, not represented by an elective for example. One example of direct democracy is through referendums. A referendum is a simple yes or no question based on an important issue which almost all citizens can vote on. An example of a referendum is the 2014 Scottish Independence referendum. Direct democracy is a wholly beneficial working as it is the purest form of democracy as power is temporarily transferred to the people. Referendums, as described as an example, are also arguably very good for democracy in a number of wars. It increases voter turnout ? the Scottish Independence referendum had a turnout of 84% - it prevents government from making unpopular decisions and the people are more likely to accept law if they have expressed consent ? all improvements to democracy and beneficial to democratic renewal. 5/5 ? no feedback 1. Explain the criticisms of representative democracy (10) Representative democracy is where the people?s opinions are represented by an elected MP who is solely involved in decision making processes. It is argued that this is a bad form of democracy for a number of reasons. First and foremost, it is argued that MPs cannot be truly representative under current circumstances. Within the Commons, a staggering 90% of MPs are university educated in comparison to a minute 4% of ethnic minorities. ...read more.

Finally, citizens may use the referendum as a chance to express dissatisfaction for the government of the day which, again, would skew the result and is very undemocratic in itself. Finally, encouraging participation would improve democracy as it would lead to a higher turnout and ultimately mean government is more likely to be elected on a majority. One way of encouraging participation would be to introduce text voting; a citizen could vote in elections using their phone ? it would increase participation as it is convenient and accessible, people do not have to even leave their homes to vote. However, there may be security issues and it could be difficult to validate votes and ensure only one vote is being cast. Placing polling stations in more accessible places ? such as supermarkets ? would increase participation as they may be closer to the voter meaning they would be more likely to vote. Lastly, the voting period could be extended to several days ? this would mean the voter has more tie to vote and doesn?t have potential pressure if they cannot make it to the polling station in time on the day. A concern of this is that it would draw out the time it takes to count the ballots and subsequently end the election process. Out of all suggestions, lowering the voting age seems to be the best idea to improve democracy as it would have the greatest beneficial impact against lowest negative drawbacks. ...read more.

Extremist parties are awful for a country ? especially its democracy. Using BNP as an example, nationalism is the idea that one country is better than another and that other countries are comparatively inferior. This ideology can lead to internal and external disagreements, and potentially even war. By retaining FPTP and ensuring extremist parties cannot gain power, we are protecting the country from nationalism and other such negativities. On the other hand, there are many reasons why we should get rid of FPTP. Firstly, it can elect governments on a minority, this means that the majority of the public may not want the current government in power. Such minority governments are also seen as weak and unstable, and may have difficulties passing laws without the support of the majority of the electorate. Similarly, FPTP can produce coalitions which are also seen as weak, such as in 2010 when the Conservative party formed a coalition with the Lib Dems. If we adopted a PR system, government would be strong as it wouldn?t be elected on a minority. As well as this, FPTP discriminates against smaller parties and the Lib Dems, which is unrepresentative and undemocratic; it encourages tactical voting and implies we will never truly be accurately represented, as next-to-nobody?s opinions are solely conservative or labour. Many votes are wasted through FPTP which leads to disillusionment, too. However, overall there are more benefits to retaining FPTP; the people seem satisfies and it has proved no violent revolts or riots, thus we should keep FPTP and save ourselves the trouble of a lengthy, complex change to a system unproven to aid democracy or representation. ...read more.