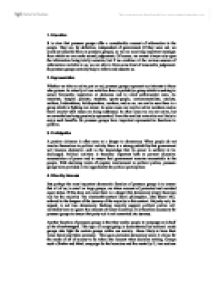 1. Education It is clear that pressure groups offer a considerable amount of information to the people. They are, by definition, independent of government (if they were not, we could not describe them as pressure groups), so we are receiving important messages from which we can make sound judgements. Of course, we cannot always rely upon the information being totally accurate, but if we combine all the various sources of information available to us, we are able to form some kind of reasonable judgement. So pressure groups certainly help to inform and educate us. 2. Representation Whether we take an active part or not, pressure groups represent our interests to those who govern. In virtually all our activities there is probably a group which is seeking to secure favourable legislation or decisions and to avoid unfavourable ones. As motorists, hospital patients, students, sports-people, environmentalists, cyclists, walkers, birdwatchers, holidaymakers, workers, and so on, we can be sure there is a group which is fighting our corner. In some cases we may be active members and so know exactly what issues are being addressed. ...read more.

An example of this is the Royal Society for the Prevention of Accidents, which helped to draw up the legislation required to make seatbelts compulsory. Membership of this group includes many experienced casualty doctors. Certain pressure groups also have the important role of providing expertise and advice to the government in particular fields. Insider groups help the government by supplying them with relevant information concerning key issues. In order to do this they carry out detailed research and therefore the government trusts their results. This enhances democracy since it is an example of the government listening to multiple views and taking many factors into account when making decisions. The Association of Chief Police Offices (ACPO) is an example of an insider pressure group which the government consulted when drawing up the terrorism bill post 7/7. There are points against this argument though since such pressure groups can gain too much influence within the government, thus limiting potential for opposing views of less significant outsider groups. * The picture is not completely rosy, however, where pressure groups are concerned. There are a number of senses in which they may not democratic principles. ...read more.

There may also be sudden waves of public emotion that can thrust an issue into the limelight, possibly without full justification. The Snowdrop Campaign, for example, worked successfully for a ban on the keeping of handguns after public outrage following a school massacre at Dunblane in 1996. The result was rushed, unsatisfactory legislation that appears to have done little to reduce gun crime. Finally, there may simply be periods when a particular group enjoys the support of the government of the day. This has been true of ASH (Action on Smoking and Health) after 1997. But who can say that their successes do not infringe the rights of smokers to pursue their own pastime without persecution? Finally, we must accept that some pressure group leaders may not truly represent the views of their members. This used to be a charge levelled at trade union leaders (less so since democratic reforms were introduced to unions in the 1980s), and it remains a danger. Party politicians are made accountable for their actions through the electoral process and through representative institutions. This may not be the case with pressure group leaders. Such a problem may not be widespread but it is certainly true that democratic controls over pressure groups are weaker than those affecting parties and politicians. ...read more.