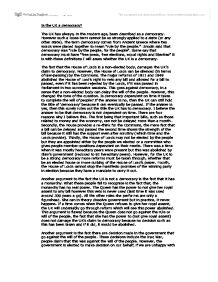 Is the UK a democracy? The UK has always, in the modern age, been described as a democracy. However such a loose term cannot be so strongly applied to a state (or any other state). The term democracy comes from Ancient Greece where two words were placed together to mean "rule by the people." Lincoln said that democracy was "rule by the people, for the people". Some say that democracy must have "free press, free elections, equal rights and liberties" It is with these definitions I will a***s whether the UK is a democracy. The fact that the House of Lords is a non-elected body, damages the UK's claim to democracy. However, the House of Lords can be silenced (in terms of law-passing) by the Commons. The major reforms of 1911 and 1949 abolished the House of Lord's right to veto any bill and allowed for a bill to passed, even if it has been rejected by the Lords, if it was passed in Parliament in two successive sessions. This goes against democracy, in a sense that a non-elected body can delay the will of the people. However, this changed the tone of the question. ...read more.

She can in theory dissolve government but in practice, it never happens. If a time comes when the Queen refuses to give her royal assent, the UK will undeniably go through reform which will see this power abolished. This argument is flawed because the Queen does not go against the rule or will of the people, the fact that she has the power to (not give royal assent) does not damage the UK's claim to democracy because no decision such as this has been taken and if it did, it would be abolished. Another argument is the fact there are decision made in the government that go against the will of the people. These decisions include the Iraq War, people claim that this was against the will of the people. However, the government is elected to make decision on our behalf, if we are unhappy with a decision they make then we can hold them accountable by not voting them in the next elections. The decision that was made in 2003 to go to war was a democratic decision which Blair went to the government for and was passed (200 vs. 299). In 2005, elections were held and Labour (the majority party at the time of the Iraq War) ...read more.

I am not claiming that there shouldn't be reformed, rather, that what the House of Lords does is provide time for rethink and during this time it can help the people understand more. The accusation that the monarchy also derogates the democracy is in theory, right, however in practice completely absurd. The basic answer to the question "Is the UK a democracy?" is yes, but it is not perfect. The UK has a freedom of expression, freedom of press, freedom of movement and freedom of religion. These are all factors of a good democracy. We have a representative institutions and the information they have we can quickly gain access to (Freedom of Information Act). The reason I say that it's not perfect is because there have been heavy criticisms about the electoral system that works in this country (first past the post) which means that majorities of support can be very small. The fact that the government keeps files for 30years before publishing them shows that the Freedom of Information Act can't get us everything. Bureaucrats can influence ministers even though they are not elected. As a observer can clearly see, the UK is a democracy but it'll have to keep reforming until it is perfect and near the likes of Finland. ?? ?? ?? ?? Mustafa Latif-Aramesh - 12HLG ...read more.