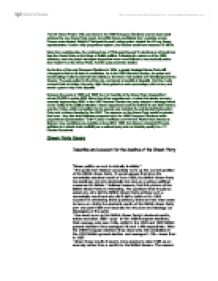 Describe and account for the decline of the Green Party

The UK Green Party's 15% vote share in the 1989 European Elections was the best result achieved by any Green Party (ever), but whilst Green candidates from countries across Europe were elected, Britain's 'First-past-the-post' voting system denied the UK any Green representation. Under a fully proportional system, the Greens would have returned 12 MEPs. More than anything else, the continued use of 'First-past-the-post' in elections at all levels has kept the Green Party on the fringe of British politics. Following the outcome of the 1989 elections, even the party's strongest supporters were more inclined to vote tactically rather than 'waste' it on the Green Party. And the party went into decline. By the time of the next European Elections in 1994, a greatly depleted Green Party still managed to field a full slate of candidates. As in the 1992 General Election, the press and broadcasting media focused almost entirely on the three main parties and virtually ignored the Greens. The party polled 3.4% of the vote, and saved a handful of deposits. Had the media covered their campaign, the party might have gained an extra percentage point or two, and saved a great many more deposits. Between the years of 1990 and 1995 the membership of the Green Party dropped from almost 20,000 to under 4000. ...read more.

`In the 1989 European elections, the Green Party won 15% of the national vote, 20% in some divisions and in 6 divisions actually beat the Labour Party for second place. However the turnout for the elections was only 36% (due probably to the ignorance surrounding the purpose of the European elections) and due to the nature of the political system, the Green Party won no seats. The 15% that they did win was evenly spread across the country so there were no particular areas to concentrate on (although both the Green Party and it's predecessor the Ecology Party have traditionally been strongest in the south and south-west) and build in. Cootes is undoubtedly right that "in the absence of electoral reform, the Green Party is likely to remain on the margin", yet this does not fully explain the "decline" of The British Green Party. `"In one respect, and perhaps only one, the Greens are a real political party. They are good at internal disputes." `This quote goes a long way to illustrating the other main reason why the British Green Party has become marginalized - continuous fighting between opposing factions, representing different ideologies. As Gavin Evans puts it, "the same old story has unfolded for the Green Party: insufficiently strong or decisive leadership has failed to lift the party out of the mire of internal dispute." ...read more.

`The less well known green ideology is that of "ecologism" which was described by two "Dark Greens" as a "non-violent revolution ... new economic and social order ... a ... radical ... political and cultural force ... (my own emphasis). It is fair to say that ecologism is slightly more extreme than environmentalism, which is probably why the Green Party doesn't publicise it widely, as it believes it would alienate the public. Some commentators disagree, one (a non-green) claiming that "if the movement is to grow ... it will ... have to mobilize this dark-green side as well as the light-green forces of reasoning, debating and campaigning." `In conclusion, I would argue that the British Green Party has not declined, the 1989 result being a fluke, due to a combination of different factors but the party itself has problems, both ideologically and structurally which are preventing it from making a greater impact on British society. I see ecologism as being superior to environmentalism as it is a radical, long-term, anti-capitalist view of society whereas environmentalism is a reformist anti- industrialist theory, but the British political and social culture is not receptive to such a view - yet. More serious is the need to formulate a workable strategy and a party structure that will allow argument and different opinions without collapsing into factions. `Until these problems are resolved, then the Green Party will remain marginalized. ...read more.