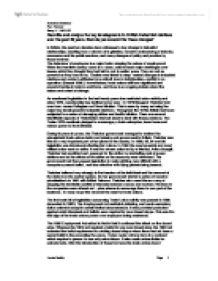 Describe and analyse the key developments in British industrial relations over the past 20 years. How do you account for these changes?

Describe and analyse the key developments in British industrial relations over the past 20 years. How do you account for these changes? In Britain, the past two decades have witnessed a key change in industrial relationships, resulting from a stream of legislation, massive restructuring of industry, commerce and the public services, and many changes of policy and practice by those involved. The behaviour of employers is a major factor shaping the nature of employment. When the twentieth century came to a close, unions faced major challenges over issues which they thought they had laid to rest in earlier years. They are not as powerful as they used to be. Decline was linked to deep-seated changes in industrial relations and worker's attitudes from collectivism to individualism, conflict to co-operation. (Basset 1986.) Nevertheless, trade unions still form significant and powerful bodies in today's workforce, and there is an ongoing debate about the nature and extent of change. As mentioned legislation in the last twenty years has restricted union activity and since 1979, membership has declined every year. In 1979 Margaret Thatcher took over from James Callaghan as Prime Minister. This is seen by many as being the major key development in industrial relations. Throughout the 1970s Britain had been subjected to a series of damaging strikes and terrific inflation. ...read more.

Also seven days notice was required for industrial action, the wages council was abolished and employers were allowed to offer inducements for non-union contracts. Citizens also had the right to sue if damaged by industrial action. The conservative legislation consists of these 7 major acts as well as important legislation dealing with specific issues such as the 1986 s*x Discrimination act and the 1986 Wages Act. The overall thrust of the legislation is to support individualism, employee protection and employer rights. All of this collectively can be seen as leading to the decline in trade union density. In 1979 there were 13.2 million trade union members and 12 million were in unions affiliated to the TUC. By 1992 membership had fallen to less than 9 million of which only 7.3 million were now in the TUC unions. (Source: TUC). These are overall figures but union membership varies enormously by industry and the type of jobs that people do. However it is important to mention that there has been a small increase in recent years, however there is little to suggest that this will ever reach the levels the unions enjoyed in the 70's. In 1997, Tony Blair came into power when the labour government was elected. Labour has not introduced as many laws as the conservatives and so there is not a great deal of change in legislation, and there was no attempt to re-instate any of the parts that the conservatives abolished. ...read more.

HRM has become so important that firms cannot afford to ignore it. Unions find it harder to represent employees, when the firm is constantly evaluating its employees needs and ensuring that they are working in a safe and happy environment. Unions have begun to broaden the issues with which they will bargain on, on behalf of employees. HRM has led to employers being in a stronger position and with new strategies such as pay reviews, PDR's there is for some employees little need for them to belong to a union. However some professions do still have a high number of union members, these are usually found in the public service such as teaching and NHS where pay is often an ongoing issue. Having studied the decline in trade union membership it is important to remember that Trade union membership is still quite high and many people are employed in workplaces where unions are recognised by management for negotiating pay and conditions of employment. In 1995 an estimated 47% or 10.2 million of all employees reported that they worked in these workplaces. (Source: TUC) There is also evidence that the decline in union membership is beginning to slow up. The TUC has launched a major recruitment drive called "New Unionism - Organising for Growth" and many unions are stepping up their efforts to recruit in new industries and jobs. More and more people are turning to trade unions because they want the protection they can provide. ...read more.