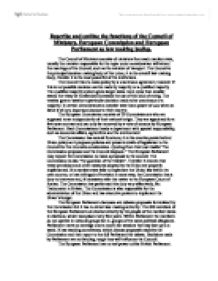 Describe and outline the functions of the Council of Ministers, European Commission and European Parliament as law making bodies.

Describe and outline the functions of the Council of Ministers, European Commission and European Parliament as law making bodies. The Council of Ministers consists of ministers from each member state, usually the minister responsible for the topic under consideration will attend the meetings of the Council, such as the minister of transport. The Council is the principal decision making body of the union, it is the overall law-making body, therefor it is the most powerful of the institutions. The Council tries to make policy by a unanimous agreement, however if this is not possible decision can be made by majority or a qualified majority. ...read more.

They are appointed for a five-year contract and can only be removed by a vote of censure by European Parliament. Each Commissioner heads a department with special responsibility, such as economic affairs, agriculture and the environment. The Commission has several functions; it is the emotive power behind Union policy as it proposes policies and presents drafts of legislation to the Council for the Councils consideration. Quoting from their own leaflet "the Commission proposed and the Council disposes." The European Parliament may request the Commission to make a proposal to the council. The Commission is also "the guardian of the treaties". ...read more.